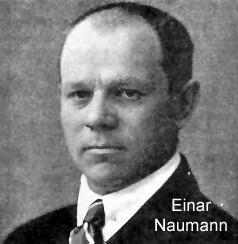 He studied in southern Sweden at the University of Lund. In 1917, he completed his Ph.D. in botany and zoology and advanced to docent in botany with studies on phytoplankton and sediment formation in some Swedish lakes. He conducted many diverse limnological studies, particularly in the Aneboda region, and established an Institute of Limnology at the University of Lund in 1929, when he assumed the chair of professor of limnology. Over a period of 23 years, Naumann produced 297 publications, including several books, such as the major work in 1931 Limnologische Terminologie (Björk 1988).

He is commemorated by the Naumann-Thienemann Medal >>>