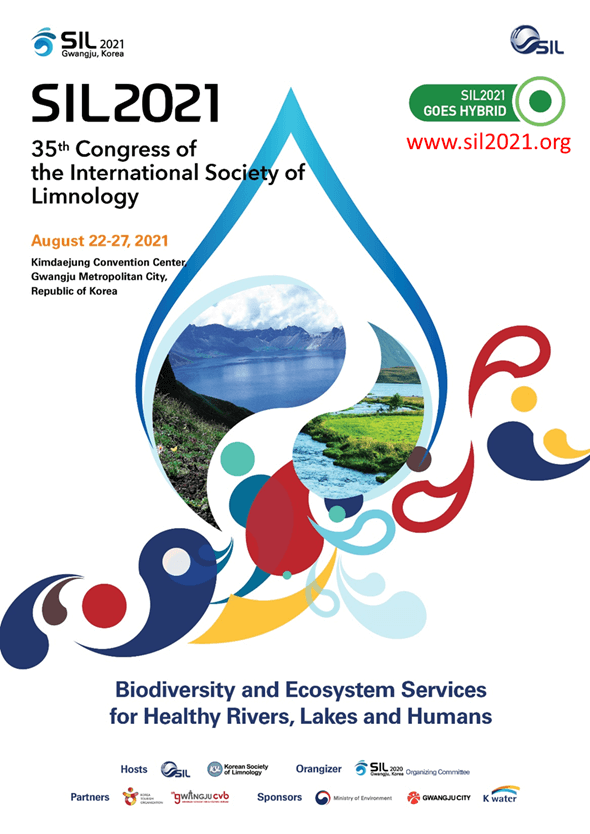 The 35th Congress of the International Society of Limnology AUGUST 22-27, 2021 held in Gwangju, Republic of Korea was a great success! Its theme Biodiversity and Ecosystem Services for Healthy Rivers, Lakes and Humans drew over 500 people from more than 50 countries. Over 100 students and early career researchers participated in on-line courses and over 50 students had inspiring brain dates with Eminent Scholars. On-line Working Group meetings also saw a healthy participation of members. Keeping with SIL’s mission to encourage and train students and early career researchers, 32 students acted as co-chairs for the various sessions of the congress, giving them precious hands-on experience both in scientific discussion and the workings of a scientific meeting.

Please find below the minutes of important meetings that took place during the congress:

Network with leaders and peers! SIL Meetings bring together the aquatic scientists from all over the world and offer abundant opportunities to meet and interact with your peers.

Our Society is an international non‐profit organization dedicated to advancing limnology for the benefit of all. It is with this principle in mind that the congress co‐chairs Cristiana Callieri, Luigi Naselli‐Flores and myself started organizing the 33rd SIL Congress with the goal of producing a scientifically relevant event, taking into account the interdisciplinary nature of limnology, promoting a large attendance of colleagues (in particular of young scientists), and ensuring the self sufficiency of the congress. We kept the registration fees as low as possible, and we put a lot of effort in the preparation of the program and the conference logistics. We also tried to ensure the best use of revenues from subscriptions, reducing as much as possible unnecessary expenses and seeking additional funds, to offer participants extra benefits tuned to possible additional revenues.

The congress statistics let us believe we achieved the goal. This belief was supported by the 816 participants from 58 countries coming to Torino, thanks to the appealing program but also to the low registration fees, at least 1/3 lower than in previous congresses. 36% of attendants were students or colleagues early in career, facilitated by the low registration fees (200 and 250 € for members and non‐SIL members, respectively). The interest in limnology was confirmed by the participation of numerous non‐SIL members (58%). This suggests that there is room for the further growth and development of SIL.

The appeal of the plenary lectures and the speakers, listed below, certainly contributed to achieving the objective:

Challenges and opportunities for research and management in Mediterranean‐climate rivers.
Núria Bonada

A novelty of this conference was the kick‐off plenary lecture, held by Professor Christian Greco, Director of the Egyptian Museum in Torino with the title: Water management in Theban archaeology. It was not on a limnological subject sensu stricto, but it aroused the interest of all because the lecture addressed the issue of traditional water use in ancient Egypt and the technical theme of the problems caused to the conservation of Egyptians archaeological sites by the modern water use.

The second novelty of Torino SIL 2016 was the plenary lecture given by the winner of SIL Students Competition. SIL successfully introduced this competition to enhance the presence of young researchers in the association. We also had a chance to ask the winner, Jeremy Pigott, to present during the closing ceremony his view on SIL and the Congress.

In spite of the difficult economic situation (only 4% of the total budget were from sponsors), we obtained good support for students and some in‐kind sponsorship very welcomed by participants (for instance free ice cream and beer). It was also possible to offer an Occitan music concert at the Congress Opening Ceremony, which was well met by the participants.

We rented a comfortable conference venue (Lingotto Congress Center) and an effective audiovisual management system. The 10 parallel sessions during the 4 days of the conference have worked well, without loss of time due to technical problems.

The SIL Congress had a significant relevance in the Italian media. The three major national newspapers devoted space to the event and published articles on topics related to ecology of inland waters during the Congress days. Even the radio channels and the national and regional TV channels interviewed the organizers and the participants, and broadcasted services on the Congress.

During the Congress there was a national round table, which involved numerous water managing public bodies (summary at http://www.silitaly.it).

Finally, the 33rd SIL Congress was rewarded with a surprise arriving a few days after the Congress ended. This has bridged a little, at least emotionally, the gap of the absence of public funding. The President of the Italian Republic Sergio Mattarella offered a commemorative plaque in bronze in recognition of the international relevance of the 33rd SIL Congress.

The 32nd triennial SIL Congress entitled “Diverse water – Rich life” turned out to be a great success. For five days, from 4th and 9th August 2013, some 460 scientists from 47 countries gathered together at Budapest. The daily deliberations were preceded by plenary talks on subjects of general importance and changing significance. The participants demonstrated the importance of understanding the problems related to different aspects of inland waters.

The scientific program was a rich mix of scientific formats, ranging from memorial lectures, to plenary speeches featuring famous speakers and thought-provoking topics. The Baldi Memorial Lecture was given by Robert J. Naiman from the School of Aquatic and Fishery Sciences, University of Washington and Centre of Excellence in Natural Resource Management, USA, University of Western Australia, Australia with the title “Complexity and the Restoration of River Ecosystems”. The Kilham Memorial Lecture by Cathrine M. Pringle from the Odum School of Ecology, University of Georgia, USA was titled “How resilient are neotropical stream ecosystems to species loss and climate change?”.

The authors of plenary presenters are outstanding limnologists

In addition to these lectures, the scientific program comprised 287 oral and 117 poster presentations. Sessions were all held under one roof in the exquisite Budapest Congress Centre, where we had numerous lecture rooms reserved daily for 8 parallel sessions covering the 22 topics of the congress, ranging from molecular biology and biodiversity to biogeochemical cycles and limnology at global scales.

In addition to the scientific program, we successfully organised several mid-congress excursions. Hungary abounds in sites and attractions to visit, whether you prefer to visit historical landmarks and natural phenomena, or you are more interested in special activities like fishing, thermal spas or horse-riding. Our visitors had the opportunity to see natural submontane streams typical of Hungary, small (Ipoly) and large (Danube) rivers and the largest shallow lake of Central Europe, Lake Balaton.

The Congress Dinner on the 8th of August was held in the rolling hills of the Domony Valley, about 50 km from Budapest, where all services selected for our entertainment were provided successfully. At the site we found not only beautiful scenery, but also enjoyed a sumptuous dinner with typical Hungarian dishes, drinks and music. After dinner when it had become dark, a popular equestrian show entertained us all for more than an hour.

The congress also enabled participants to build and strengthen networks, allowed them to share and exchange information. This will help the congress delegates to utilise the acquired knowledge in furthering our understanding of inland waters. During the Student Forums young scientists had the possibility to talk face-to-face with well-known limnologists and board members of the SIL.

Following a formal bid to host the congress in 2001 during the 28th congress in Melbourne and partial acceptance in 2004 at the 29th congress in Lahti, it was awarded to South Africa in 2007 at the 30th congress in Montreal. Unfortunately several of the initial lobbyists retired or moved to greener pastures, which meant that only a handful of us drove the process. The Local Organizing Committee (LOC) consisted of: Johan Grobbelaar (chairperson), Brian Allanson (convenor of the scientific committee), Mike Silberbauer (IT and logistics coordinator), Carin van Ginkel and Jenny Day.

The University of the Free State provided assistance with the finances, book keeping, web space, IT, local marketing and some administrative support. Post graduate students and staff from the University of Cape Town helped with the registration and excursions, while Sue Allanson, Mercia Grobbelaar, Anita Lombard and Julanda Theron handled the registration and information desk. It is a daunting task to organise a SIL congress, but equipped with a two page “Manual for Organizing a SIL Congress” written by the late Bob Wetzel, fools rush in where angels fear to tread! Some 900 regular mail letters were sent to SIL members and a total of almost 5 000 emails were handled by me alone, which excludes those done by the other LOC members. It required quite a balancing act to marry the venues with the number of delegates, especially since the numbers increased significantly just prior to the deadline for registration and the week following the deadline. We deviated slightly from previous SIL congresses in that the midweek excursion was only a half day and the congress was five, instead of six days. Some statistics and information on the 31st congress are:

Pre- and post congress tours were offered and delegates could choose from six mid-congress excursions (the latter included limnological and scientific information). The registration fee covered all costs at the venue, i.e. the welcoming function, teas/coffee, lunches, mid-week excursions, dinner, individually made congress bags, programme, CD with abstracts and a congress T-shirt. We also managed to support each student delegate with US$ 200 to cover the actual costs. Seven prizes were awarded to students at the closing ceremony, following the adjudication by Judit Padisak and her team. Scientifically and socially the congress delivered. There was ample time to meet and discuss issues. The new SIL journal (Inland Waters), declining numbers of SIL members and the problems facing the inland waters of South Africa and many other areas of the world were discussed in depth. Climate change, great lakes, informatics, lipids and the impact of water level fluctuations, were only some of the session topics. The many encouraging emails and praise, are ample reward for organising the congress and we as the 31st Congress LOC, wish the organisers of the 32nd Congress all the best and remember “Come the night, all will be alright”.