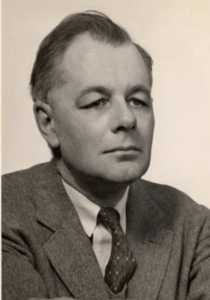 George Evelyn Hutchinson (1903-1991) was born in Cambridge, England.  His father, a mineralogist, encouraged him to think scientifically and introduced him to scientific programs at Cambridge. Evelyn was particularly interested in the study of aquatic insects.  He was admitted to the University of Cambridge where he showed proficiency not only in zoology, his special interest, but also chemistry, physics, and mathematics. His breadth of fundamental knowledge was later to be of great value in building novel components of ecology and limnology.  He graduated in 1925, but did not seek a doctoral degree.

After leaving Cambridge, Hutchinson took a fellowship in Italy and then was hired as an Instructor at Witwaterstrand University near Johannesburg, South Africa.  He studied the fauna (especially aquatic insects), and other aspects of shallow lakes in South Africa, thus showing his inclination to become a limnologist. He then applied for graduate school at Yale. Although rejected, he was offered a vacant instructorship, which he accepted. Shortly thereafter he was asked to lead the Yale North India Expedition in 1932, which allowed him to study two high elevation lakes . While the effects of elevation on lakes are substantial, they were not well documented at that time. Hutchinson showed that food webs in high elevation lakes differ substantially from those at low elevation.

Despite his lack of a PhD, the Yale faculty offered Hutchinson a Yale professorship, which he retained for the rest of his life.  He chose Lindsey Pond, a small kettle lake near the campus, as a place for testing ideas about lakes.  Hutchinson and his students characterized the lake using standard methods, but Hutchinson was innovative in analyzing the data.  He used mass balance concepts and equations to estimate mass movement of substances in the lake. Although simple, this approach was new to limnology and ecology at the time.  Hutchinson was especially interested in the cycling of specific elements in lakes.  He saw evidence that phosphorus, a key nutrient for phytoplankton, was moving from the water column to the sediments and then back to the water column. To test this idea, in 1941 he obtained radioactive phosphorus (32P) from a cyclotron at Yale and distributed it into the lake as a tracer. He was the first to use a radioisotope in this way, and confirmed his idea that P in the lake was cycling from sediments to water and back. This circulation of a biotically active substance was treated by Hutchinson as a key feature of ecosystems. On an even larger scale, Hutchinson later published an analysis of the earth’s nitrogen cycle and also proposed that increasing carbon dioxide released by human activities to the atmosphere would raise the temperature of the earth. Hutchinson was first to show the ecological importance of biogeochemistry at all scales. His use of a radioisotope also led him to realize that change in environments over very long spans of time can be quantified by use of isotopes. For lakes, this was the basis of paleolimnology, as developed in early stages by Edward Deevey, a student of Hutchinson.

Hutchinson is well known for his contribution to the concept of the ecological niche, introduced by Charles Elton as a specific kind of habitat populated by a particular species. The concept asserted that a given species is adapted to a set of conditions that determine its distribution and abundance. Hutchinson made the concept more quantitative by showing that the niche of a species consists of a suite of conditions that can be quantified and viewed as dimensions or, as he proposed, a multidimensional space that can be quantified and therefore used to predict the distribution of a species. Hutchinson later resolved a complication of niche that is most evident in lakes, the paradox of the plankton: given that the water column of a lake is very homogenous, how can it sustain so many planktonic species? The answer, he argued, is constant temporal change, which shifts the niche components in a way that favors a succession of many species rather than a more static, small group of species.  Hutchinson also brought new perspectives to the analysis of food webs through cooperation with Raymond Lindeman, a postdoctoral associate who had assembled a large data set on species in a lake. Following precedent for that time, Lindeman arranged the species and their abundances as feeding groups (trophic levels) that made a food web extending from grazers to top predators.  He and Hutchinson saw that the data behind the diagram could show energy flow rather than just the architecture of the food web. The key was expression of biomass as energy. The food web then would show dissipation of energy in transition from bottom to top, which explains why food webs have relative few levels. This was a large contribution to ecosystem science, accurately credited to Lindeman, but likely stimulated by Hutchinson.

In the 1950s, Hutchinson began work on a comprehensive overview of limnology.  This work was instrumental in consolidating the science of limnology and revealing the pathways along which it could be developed most effectively.  It brought together the global dimensions of limnology beginning at a time when international exchange of limnological knowledge was slow and difficult.  The Treatise on Limnology consists of four volumes, the first published in 1957.  The Treatise is a great example of scholarship and a cornerstone for limnological science.

Hutchinson led the modernization of ecology by showing the value of quantitative thinking and analysis as a companion to empirical data collection. By his example, mathematics became a key tool in ecology, and ecologists expanded their studies to all spatial dimensions of environment from single species to ecosystems and the biosphere. Limnology was modernized along with the other branches of ecology, but limnology held a special significance for Hutchinson, who used his profound  knowledge of lakes to find new pathways for building the strength of ecological sciences.