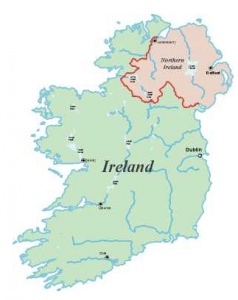 A link between SIL and Ireland was established by the late C.F. Humphries, former Professor of Zoology at University College Dublin, from her pre-war studies on Chironomidae at the Hydrobiologische Anstalt der Kaiser Wilhelm Gesellschaft (later to become the Max Planck Institut) at Plon in Germany, under the direction of SIL co-founder August Thieneman. The bond with SIL was maintained on her return to Ireland when she fostered limnological research in the Zoology Department, UCD. Half a century later, chironomid research continues but aquatic studies in the Zoology Department have diversified to include investigations on fish, invertebrate fauna and analyses of lake sediments to hindcast trends in lake water quality. The SIL Irish National Representative, Dr Declan Murray, is currently based in UCD, where delegates will assemble next year for the “Water of Life” – 27th SIL Congress, the last big limnological event of the millenium.

For members who may be interested to know a little more about limnology in Ireland – be warned that in limnology (as in other aspects) Ireland is not quite like Great Britain or continental Europe!

The visitor to Ireland may find it a confusing country, not least in the way its freshwater resources are arranged. Short hill streams tumble down the mountains around the edges, but much of the centre of Ireland is flat, with slow-flowing rivers, canals and a maze of lakes and bogs, which also creates major drainage problems for agriculture. Freshwaters cover some two per cent of Ireland, twice the European average, and almost twenty per cent of the country is or was bogland. Rainfall averages 1,120 mm per year (from from 620 mm in the south-east to 3,000 mm in parts of the west). It rains about two days in every five, relatively evenly spread across the year. The average evaporation rate is 41%, leaving 59% of the rain to drain to the sea through bogs, and about 1,445 km2 of rivers and lakes. It is often very windy, so lakes do not predictably stratify. This is what we call an ‘Atlantic’ climate.

Ireland is essentially a Palaeozoic synclinal basin and there is no central mountain spine, nor is the mix of stratigraphy found as in other sizeable temperate islands such as Iceland, Britain and Japan. The old fringing mountains are igneous or metamorphic granites, gneisses and schists; Devonian sandstone ranges run east-west across the southern part of the country, while Carboniferous limestones occupy much of the low-lying centre and west of the country.

In the last million years glaciations covered most of the country. Some of the largest lakes were gouged out by ice and their extent enlarged by solution. Following the gradual melting of the ice, the midlands were littered with irregularly dumped glacial deposits which impounded meltwater as a maze of large, shallow lakes extending over perhaps five per cent of the country. Most of these became overgrown, swamped and infilled in a burst of aquatic growth and became fens, later succeeded by raised bogs over most of the country. Of the lakes which still remain, many are far larger than anything in the neighboring island.

Active karstic development occurred at times of lower sea level, and some of today’s low-lying, level limestone beds are riddled with caverns; drainage occurs both below and above ground, the latter chiefly after rain, resulting in temporary springs and lakes (‘turloughs’) in the western third of the country. However, few obligate cave species are known in Ireland, probably owing to its short post-glacial history and early separation from the continent. The original freshwater biota must have been a mixture of landbridge-hopping forms and diadromous or euryhaline species such as salmonids, eels, stickleback and the Irish freshwater shrimp Gammarus duebeni. Perch, pike, tench and many others were introduced in historic times, and perhaps also species such as the frog and freshwater crayfish, popularly supposed to be native and whose Irish populations are now the strongest in Europe.

Finally, the impacts of human expansion. Neolithic men built wooden trackways across the great raised bogs, and five thousand years ago their large fields in May were overwhelmed by blanket bog. In this century the greatest change has come from arterial drainage of many lowland rivers such as the Boyne and Moy; from large-scale peatland exploitation in the midlands and the west; from impoundment for hydro-electrical generation on the Shannon, Erne, Lee and Liffey rivers; and from gradual nutrient enrichment. The overall per capita availability of surface water is 50,000 litres per day (five times the European average) and groundwater is not widely used, but the variability, and at times critically low flows, of rivers can restrict supplies. While there is little toxic pollution, the increasing degree of moderate eutrophication is sounding some alarm bells, with its widespread and sometimes synergistic effects of dissolved oxygen, plant growth, river-bed shallowing, summer flooding, and loss of stenoxytherm species.

The Royal Irish Academy provides a forum for regular contact between limnologists North and South through its National Commission for Hydrobiology and the annual Freshwater Research Group Meeting. Modern limnological research in Ireland addresses the problems of a generally lowland, rural population with little traditional industrialisation, but where the agri-food industry and tourism are of equal value. Changing land-use practices have lead to diffuse enrichment, and water quality studies are therefore of prime significance. The Environmental Protection Agency has an Environmental Research Unit and four regional labs in the Republic, monitoring over 50 lakes and 10,000 km of streams. Similar surveys cover Northern Ireland’s streams and lakes. The University of Ulster has a laboratory at Traad Point on Lough Neagh.

In the Republic, the Central Fisheries Board also monitors national and regional lake quality, and projects searching for new indices of lakewater quality are underway at Trinity College Dublin and University College Galway (looking at the large western lakes). Palaeolimnological studies at Queen’s University Belfast, University of Ulster, Jordanstown and the NI Department of the Environment have been used to explain twentieth century changes in the Shannon, Erne and Lough Neagh; eutrophication studies in the ERU and University College Dublin have lead to remedial measures for Killarney and some Midlands lakes. Sligo Regional Technical College monitors regional streamwater quality. Finally, the impacts of afforestation are studied by TCD, UCD and University College Cork.

Given the prime importance of lakes and rivers, fish biology and fisheries are studied in most centres and institutes. The Marine Institute maintains databases of coastal and some freshwater parameters; its Fisheries Research Centre has freshwater salmonid and aquaculture sections. The Central Fisheries Board carries out research into water quality and management of inland fishing waters, including stocking with salmonids, improvement of coarse fish habitats and provision of facilities, and UCG monitors fish stocks of major waters including the Shannon. Canals and rivers are an important amenity and fishing resource, and their aquatic macrophytes, invertebrates and fish stocks are under regular monitoring by the CFB. The Salmon Research Agency of Ireland in Co. Mayo, with extensive wild-trapping and smolt-rearing facilities, carries out research and culture work on diadromous species. The NI Department of Agriculture supports studies on the River Bush fishery. Both TCD and UCG study parasite communities of freshwater fish.

In addition to fisheries, many third-level institutions have current interests and facilities in the ecology and conservation of freshwater organisms, from otters to ostracods. The biota of small and temporary waters is receiving attention at TCD, with land-use changes and a series of extreme flood events suggesting the possibility of climate change.

You will have opportunities to see many facets of Irish freshwater habitats and limnological research at SIL’s Pre- and Post-Congress Tours. Registrants will receive a free book about Irish freshwaters; all delegates will also take part in a Mid-Congress tour, and we have planned these for all tastes, interests and levels of activity. To date, we have over 1,200 pre-registrations, of whom 809 are members intending to present over 700 papers. It looks like being the experience of a lifetime, so join us in Dublin next year!