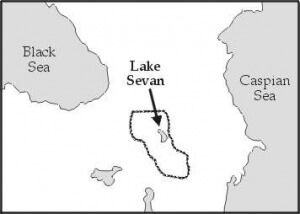 Lake Sevan (40.33°N 44.56°E), in Little Caucasus, is one of the few ancient lakes of the world and shares some rare peculiarities with some other great lakes. However Sevan characteristics and fate are still poorly known to western scientists and to environmentalists. In classical western limnology text books Sevan (1416 km2, 58.4km3) is rarely mentioned, except for its endemic fishes including Salmo ischchan and two cyprinidae species. Very few papers have been published in western journals on the Sevan issue. Four reference banks specialising in aquatic sciences produced only a dozen references in English, all others being in Armenian and Russian. Sevan is one of the few lakes of the world that has been continuously studied since 1923 when a limnological station was created. It is now known as the Sevan Institute of Hydroecology and Ichthyology, part of the Armenian Academy of Science since 1932. Other Soviet scientists from famous limnological institutes such as Leningrad, Kiev and Barnaul have also made many studies of Sevan.

In 1993 a major scientific conference was held on Lake Sevan (Oganessian, 1993) but was attended only by scientists from Armenia and other former USSR republics. Another conference organised in October 1996 by the newly created Armenian Ministry of Nature and Environmental Protection, UN Development Programme, and the French Embassy allowed the exchange of information with a few foreign experts and with some NGOs from Armenia and from the Armenian diaspora. Discussions with Armenian scientists was exciting as the lake’s peculiarities and history was more known to some of us. R. H. Hovhannissian’s book written in 1988 but only published in 1994 is one basic source on Sevan (this author is also known as Oganessian…). It is published in Russian with English and Armenian summaries and figure translations. 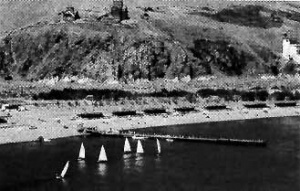 Lake Sevan, Armenia. The Saint Apostles monastery (CIX) was once on a remote island in the lake. Since the 1950s the lake level has dropped by 20 m connecting the island to the lake shore and exposing hundreds of meters of new beaches. The base of the cliff indicates the position of the former shore line.

Lake Sevan is quite old and a paleo Sevan of tectonic origin already existed at the Early Quaternary, at the site of what is now called the Great Sevan, the south east part.

The water balance of lake Sevan is unusual: evaporation over the water (800 mm.year-1) largely exceeds direct precipitation (360 mm.year-1) (Hovhannissian, 1994). As a result the lake outlet, the Razdan River, a tributary of the Araxe has an average natural discharge of 2m3/s or only 3.6% of all outputs while seepage is estimated to be 6.4% and evaporation 90%. The very restricted lake basin area and the dry continental climate result in very slow renewal of the lake water, around 50 years in its natural state. This ranks Sevan 15th among major world lakes (exceeding 500km2) after lakes Ba!kal (350 years), Tanganiika (exceeding 500 years), Superior (180 years) and a few endorheic, or closed lakes, such as the Caspian (250 years), but well ahead of much larger lakes such as Ladoga (13years), Ontario (81years), Great Slave Lake (7.4 years), Erie (2.6years) (Meybeck, 1995). Sevan is the only major lake of the region (having “softwaters” i.e. not saline) (TDS = 700mg/L).

Sevan has been recognized since the XIXth century as a key potential water resource for Armenia where the fertile volcanic soils of the Ararat plain need irrigation. The steep relief is very favourable to hydropower generation, and Erevan is some 1000m below the level of Lake Sevan. These two aspects were fully developed in 1910 by Soukias Manasserian, an Armenian engineer, in his book entitled “The Evaporating Billions and the Stagnation of Russian Capital”. His original plan was to drastically reduce Sevan’s evaporation by tapping its waters and lowering the original lake level by 50 m. The Great Sevan basin , originally 1032km2, would have been completely dried up thus leaving a shrunken Little Sevan of about 240km2 and 5km3 compared to 1416km2 and 58km3 for the original whole lake. Manasserian’s project was further elaborated in the 1930s as a major Soviet project under the compulsion of the central authorities of the Soviet Union, and was officially approved by the government of Armenia, part of the Transcaucasian Federation, without being submitted to the local population (Mikirtitchian, 1962). At that time predictions concerning the fate of the famous ischchan fisheries were quite optimistic and it was planned that fish yield would increase by 8 to 10 times after the lake had shrunk. The project started to be implemented in 1933 when the Razdan bed was excavated in order to increase the outlet discharge, and a tunnel was soon bored 40m under the original lake level. The tunnel was inaugurated in 1949 as a major achievement of the Soviet era and the lake level started to drop at a rate exceeding 1m.year-1.

The original project was first questioned in 1956, after Krushchev’s criticism of Stalin’s “great construction of Communism”. A first “Sevan Committee” was created in 1958 and the USSR government issued a decree to maintain lake level as high as possible and to develop thermal power plants from imported fuel and approved only 6 of the 8 planned, hydropower stations. This new plan to be completed in 1970 included a gradual decrease in water withdrawal for irrigation then a final stop in 1965, the use of hydropower only as a comple- mentary source for the main Armenian energy network in case of emergency and, in order to balance the hydrological budget without impeding the hydropower plants, the diversion of river waters from outside the Sevan basin was decided. As a result of the regulated water withdrawal the lake level was finally stabilized at -18m in 1962.

Another pharaonic project started: a large scale diversion through a 49km long tunnel, under the watershed line (3500m) bringing since 1981, 200 M.m3.year-1 of Arpa River water to Sevan. The lake level rose only by 1.5m but this was judged insufficient by Armenian and Soviet engineers who started to drill a second 22 km long tunnel, in order to divert another 165 Mm3.year-1 from the Vorotan River to the Arpa and then to Sevan. Presently the Arpa- Sevan tunnel is in very bad condition, due to lack of maintenance during the economic blockade and it needs to be repaired, and only 18km of the Vorotan-Arpa tunnel have been fully completed. 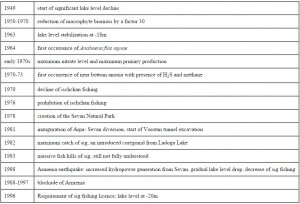 The lake level drop combined to changes of the nutrient balance lead to severe ecological degradation steps rarely found in a lake of such size.

Fish population changes are probably the most symbolic ones. The four endemic sub-species of ischchan (Salmo ischchan ischchan, gegarkuni, aestivalis, and danilevskii) were fished since humans first settled around the lake in 14,000 BC.

The official catch of Ischchan had dropped from an average 6,000 t.year-1 in the early 1950s to a few hundreds in 1976 when fishing was prohibited. However, this prohibition was only mildly enforced in the period of severe economic restriction. Sig catch started to develop when ichchan dropped in early 70s, and culminated in 1982 with 16,000 t.year-1, then declined sharply. In 1984 a massive fish kill of sig was observed, although is as yet poorly explained.

The chain of ecological responses which led to the near extinction of the ischchan is a complex one described through numerous Armenian and Soviet publications (Ostrovsky, 1989; Hovhannissian 1994). The lake level drop reduced the lake hypolimnion by a factor 2.6 from 31 km3 to 12 km3, which greatly decreased the lake self- capacity for digesting external and internal (macrophytes and phytoplankton) sources of organic matter. In 1970-73, a few years after the -18m drop, a bottom anoxia with release of H2S and methane was observed for the first time in the bottom meters of Great Sevan, at the end of summer. The lake level drop also destroyed the macrophyte belt, which was reduced by 30 fold with drastic changes in littoral populations (loss of Gammarus sp.).

Deeper sediments now contain only oligochaetes, which are highly tolerant to the bottom anoxia. In open waters the phytoplankton population also changed: diatoms originally by far the dominant group, were replaced by chlorophyceae, and cyanophyceae blooms (Anabaena flos aquae andAphanizomenon flos aquae) are common. The autochthonous organic matter greatly reduced the original average transparency of the lake, from 12.5 m to 2.7 m in 1986. It is now around 4.5 m.

The causes of the near extinction of the ischchan are thus multiple : (i) loss of original littoral spawning grounds on the lake shore and at the river mouth, (ii) changes of substrate quality in the new shore belt, (iii) changes in macrophytes population linked to spawning, (iv) changes in food web (loss of Gammarus), a species only found in clean and cool waters, (v) summer overwarming of surface waters when aestivalis is spawning, (vi) bottom water hypoxia, (vii) overfishing with monofilament nets, and poaching, (viii) questioned efficiency of artificial reproduction, (xi) competition between ischchan and introductions of exotic fishes species. Another fish the silver crucian Carassius carassius (Cyprinidae) has been accidentally released into the lake. It is a competitor to both ischchan and sig in the littoral and reproduces very efficiently in warm summer waters.

According to his ecological model Hovhannissian (1994) predicts that if the lake level is increased by 6 to 8 m and if nutrients inputs are decreased, the trophic status and oxygen balance of the lake will improve markedly. This model is a corner-stone of the restoration of Sevan. The 6-8 m level increase is now the major target of most hydrobiologists and of some water managers. Yet its predictive power still seems limited. According to Hovhannissian the lake dissolved phosphorus had decreased dramatically in the 70-s and 80-s compared to former levels, while nutrients loadings were increasing. This striking trend could result from the deep change in lacustrine geochemistry and a precipitation of phosphorus with CaCO3 during “whitings” episodes, as it has been described by Otsuki and Wetzel (1972). Therefore new models based on questionable N and P data and taking into account the latest studies of CaCO3- phosphorus geochemistry in Sevan (Ulianova, 1994), should be set up.

The future for Sevan?

Sevan has been studied by numerous scientists since the 1920s in hydrology, hydrobiology, atmospheric physics, geochemistry, archaeology, etc. They have worked so far isolated from western science and sometimes without much overall evaluation of the multiple lake issues. Now that communication is easier, funds for science have been drastically reduced due to the economic situation of Armenia. The regular chemical and ecological surveys of Sevan and its basin are reduced and one of the key institutes working on Sevan was even forced to sell its research vessel. During the October 1996 conference on Sevanmost scientists and engineers were promoting the completion of the Vorotan canal and a 4-6 m level increase was officially accepted as a final target. Hydrobiologists also insisted on nutrient control in the basin.

The difficulties of the Sevan’s restoration are multiple and the lake will probably never recover its pristine state. Even if external sources of nutrients are controlled, the internal N and P inputs from the anoxic sediment layer will still remain, a classical drawback of eutrophication issue. The long water residence time of the lake, now about 30 years, will slow any recovery process. Most of the environmental policies to control nutrient and pollutant sources within the basin are still lacking. There is a general lack of any enforcement of environmental regulations due to the present economic situation and to the absence of appropriate administrative structures such as basin water authorities.

The highly damaged Aral Sea and the unique Baïkal have both attracted a wide international attention, Sevan needs urgently the consideration of the international community – scientists, NGOs, UN Agencies, donors, etc. – to help Armenia to cope with this long heritage of environmental mismanagement. Can Sevan still be celebrated as Maxime Gorki did as: “a piece of sky fallen on earth between mountains”?