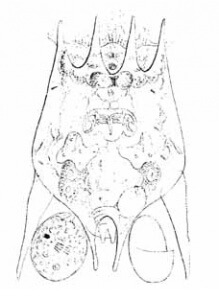 A meeting of the Rotifer Family takes place every three years and is eagerly awaited by those who have previously sampled its delights. Nor did the latest get-together disappoint, providing us with the chance to meet old and new friends and exchange information and ideas. The Symposium was held from June 22-27, 1997, at St.John’s University, Collegeville, Minnesota, U.S.A., and was organised by Dr. Elizabeth Wurdak, ably assisted by Robert Wallace.

St.John’s University was founded in 1857 by Benedictine monks, and today consists of 2400 acres of forest, lakes, prairie and wetlands, as well as graduate and undergraduate schools, residential buildings, liturgical press and monastic manuscript library. The Abbey and University Church is “an internationally recognised masterpiece” , designed by Marcel Breuer of the Bauhaus tradition, and built between 1958 and 1961, of concrete faced with granite, with a glorious stained glass facade and a 112ft high concrete Bell Banner dominating the front. The Banner, its bells and the Church provided a subject for strong debate for rotiferologists going to and from lectures. Opinions were divided. For the record, your reporter thought the whole edifice was wonderful.

But I digress. What were we learning and discussing? With some 85 oral or poster presentations in sessions including Ecological studies, Genetics and mating, Population structure, Phylogeny, River habitats and Bio-technology, it is impossible – certainly undesirable – to try to review them all. I shall, therefore, shamelessly pick out some of the papers and topics which particularly interested me personally.

As parthenogenesis is a feature of most rotifer species, and the only known form of reproduction in the Bdelloidea, genetic studies are of a particular fascination. I sat absorbed through papers by David and Jessica Mark Welch and Matthew Meselson on genome size in rotifers, on whether bdelloid rotifers have pairs of homo-logous chromosomes and whether bdelloids have really evolved without sexual reproduction and recombin-ation. Following this up with study of a poster on the subject and discussion over dinner, I remain fascinated but still hope you will not ask me to give you a detailed precis of results. I will leave that to the geneticists.

After genetics, it seemed natural to proceed to studies of male-production and mate choice, by the “Spanish school”, in this case represented by Eduardo Aparici and Africa Gomez, and the correlation of rates of mixis with permanence of habitat by Elizabeth Walsh, working in the wonderfully named Hueco Tanks State Park which includes natural and man-made ephemeral rock pools. The consequences of mixis should, of course, be resistant resting eggs. Charles King reminded us how much we do not yet know about eggs and Jose Conde-Porcuna, Thomas Schroder and Jim Green tried to remedy some of our woeful ignorance. Ducks’ feet have long served as an explanation for the ubiquitous dispersal of many rotifer species and David Jenkins took this a stage further, by examining wind, rain and waterfowl faeces for their role as vectors. Fearing that a long day in the lecture theatre might result in too many sleeping rotiferologists he abused us with packets of sweeties – called tootsie rolls (sic)! Excited by this novel way of introducing a lecture, I quite forgot to listen………. Sorry, David! I can tell you, though, that jeans pockets can be passive vectors to transport tootsie rolls, still viable, as far as England.

The biogeography and habitats in which rotifers are found continued to be topics of interest, giving rise to papers on rotifers in Alaskan Arctic lakes, a Belgian reservoir, whole-lake acidification experiments in Wisconsin, L.Peipsi in Estonia, Alpine glacier lakes, an Australian floodplain and a New Zealand lake (using pot-scrubbers as artificial substrates), as well as China, Poland, India and Thailand. One habitat which has so far received less attention is the interstitial sediment of rivers and lakes. Jenny Schmid-Araya gave us an excellent overview of work so far on this topic. The importance of rotifers here is great, feeding as they do on diatoms and the bacterial biofilm, particles not effectively grazed by others, and being food for others in their turn.

“Much of what rotifers sense about their environment comes from chemical signals”, as Terry Snell told us in a review of chemical ecology of rotifers. Tasting of algal cells and recognition of prey or of clone mates, and defence against predators are mediated by chemical signals. A glycoprotein has been detected on the body surface of females at sites connected with mating, mixis may be increased by chemical signals and they may be important for resting egg hatching – which is just about where I came in. “Rich opportunities exist for research in the chemical ecology of rotifers”, concluded our speaker.

So, stimulated by these and many other interesting ideas, we came to the final jollifications of the Symposium, including either a shopping trip to the Mall of America, or a pilgrimage to the source of the Mississippi, most of which seemed to be descending from the clouds at the time. As is usually the way with such Symposia, the informal discussions and contacts are as important as the formal sessions. We are already looking forward to the next meeting. The work from this one will be published in a Symposium volume of Hydrobiologia.