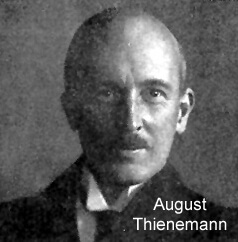 He was trained in zoology in Innsbruck, Heidelberg, and Greifswald (Ph.D, 1905, on trichopteran pupae), and habilitated as docent at the University of Münster on the distribution of freshwater organisms (Rodhe 1975). In 1917, he was appointed director of the Hydrobiological Anstalt at Plön, then of the Kaiser-Wilhelm-Gesellschaft which later became the Max-Planck-Gesellschaft, and professor of hydrobiology at the University of Kiel. Thienemann directed the Max-Planck-Institut für Limnologie in Plön for 40 years. Over a 57-year period, he published 460 publications, which included several major monographs, particularly on the chironomids and regional comparative limnology (Thienemann 1959).

He is commemorated by the Naumann-Thienemann Medal >>>