GAP 7 was held from 9 – 17 September 1999 in Switzerland. The workshop, organized by the University of Zürich, the EAWAG and by Zürich Water Supply, was attended by approximately 60 limnologists and oceanographers.

The participants met first at the University of Zürich for plenary sessions, keynote lectures and experimental planning. Although thousands of e-mails had been exchanged in advance of the workshop, the planning sessions started almost as frantically as in the stone age of electronic communication six years ago when GAP 6 was held in Saskatoon. But wondrously, as traditionally happens in GAP-workshops, we designed experimental programs that were feasible with some improvisational flair.

After two days the scientists split into groups and moved to field stations (Kastanienbaum at Lake Lucerne, Piora at Lake Cadagno, Lengg and Kilchberg at Lake Zürich) for 5 days of experimental work and data collection. The sunny, summer-like weather in a superb (pre)alpine scenery facilitated the collection of data on the impact of UV and PAR radiation on the primary production of phytoplankton and biofilms, and the dynamics of phytoplankton, microbial mats and phototrophic bacteria.

Not even the limited lab space at Kastanienbaum and Piora, which was crowded with high-tech equipment brought along by participants, prevented the participants from consuming more than 5000 scintillation vials and some 40 liters of scintillation cocktail, thus causing a permanent traffic jam with the LSC-counters that persisted for days after the workshop had ended. The lab group working with algal cultures grown under nutrient-deficient conditions kept spirits high by compensatory activities at lunch and supper. Contrary to rumors telling that Saint Peter was bribed with gold bars from the catacombs of a Swiss bank, it was sheer coincidence that rain started the day after we returned from the field stations to Zürich for the analyses, interpretations and presentations of results in the sheltered building of the Institute of Plant Biology. 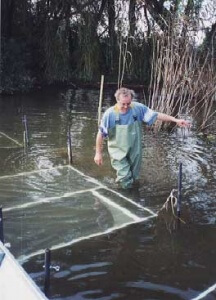 Arrangements have been made with the Managing Editor of Aquatic Sciences to publish the keynote lectures and experimental results from GAP 7 following appropriate peer review.

The International Committee, which oversees GAP activities, held a general business meeting during the workshop. The meeting was held to obtain GAP participants’ impressions of the workshop format and to get ideas for the future. In addition, a number of announcements were made:

The next meeting of the working group will be held at Melbourne, Australia, integrated into the XXVIII International Congress of the SIL. Those interested in details should e-mail their interest to:

A workshop “Aquatic Invasive Species – Developing a Scientific Information Exchange” was held at the 27th SIL Congress in Dublin, in August 1998. The goal of the workshop was to discuss and stimulate communication and networking between scientists concerning aquatic invasive species. A short proposal to establish a Working Group on Aquatic Invasive Species was developed and presented to the National Representatives when they met later in the week. The proposal was approved, and the Working Group was established.

Another suggestion was to organize an international conference or workshop on species transfers, focusing on freshwater and brackish aquatic ecosystems.

First Meeting of the Steering Committee

On November 6, 1998, the Steering Committee met in Ann Arbor, Michigan and proposed that the long-term goal of the Working Group is to promote global awareness of the problems and risks posed by cross-boundary species transfers, by encouraging and improving scientific networking and data exchanges. Emphasis will be placed on species transfers between and among freshwater and brackish aquatic ecosystems. The Steering Committee members also proposed and discussed a number of possible topics that could provide the foci for an international conference.

During 1999 the Steering Committee made significant progress with its goals. Funding was obtained to support several international invasive-species-related activities related to the Working Group, in association with ASLO 2000.

The Steering Committee will focus on organizing the Working Group around an international network of interested scientists and decision-makers during the next year, and expects that substantial progress will result from the activities described above.

Please include your name, mailing address, telephone and fax numbers, e-mail address, and an indication of how you would like to be involved.

David Reid, for the Steering Committee