The Channel Country in SW Queensland

Australia’s arid zone covers 70% of the continent, but most limnology has been confined to the well-watered coastal fringe and the Murray-Darling system. Yet the continent’s arid core harbours large river systems worthy of international as well as national attention. A prime example is Cooper Creek, in the Lake Eyre Basin (one of the world’s largest endorheic systems). The fact that the Cooper was named a creek by early explorers, despite draining a catchment of 306,000 km2 and having a river length of 1,523 km, is an illustration of the difficulty a eurocentric culture has coming to terms with the Australian environment.

These rivers are certainly unusual. A recent multivariate comparison of the Cooper and Diamantina with other rivers of comparable size worldwide demonstrated their extreme and multifaceted hydrological variability. The Cooper may stop flowing in some years, yet can produce floods of 22,000 GL. These rivers are also unusual geomorphologically. They flow through the central sand and gibber deserts of Australia, along extremely low gradients and through landscapes of minimal relief. The lower and middle reaches of the Cooper have an average gradient of 0.00017, and its floodwaters spread over floodplains up to 150 km wide, in complex patterns of anastomosing and braided channels, floodplain lakes and internal deltas. 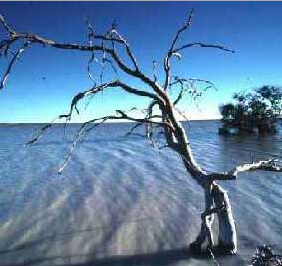 As one would expect, such rivers have an unpredictable boom and bust ecology. Their biota exhibit the characteristics expected in a variable and arid environment – opportunism, high physiological tolerance, mobility, dormancy. But the scale of biological fluctuations may be extraordinary. In floods, waterbird numbers on Lake Eyre, at the terminus of Cooper Creek, may reach 600,000, and there is increasing evidence that the Lake Eyre Basin wetlands are one of the major foci for waterbird activity on the continent.

The rivers of the Australian arid zone are also remarkable, and particularly valuable, because they are virtually unregulated. On the Cooper, some 10,000 small offtakes and farm dams in the headwaters reduce low flows. Compared to the massive impacts of irrigation and impoundment inflicted on large arid zone rivers elsewhere in the world, the Cooper and similar Australian rivers are benchmark systems, invaluable as reference points for management and restoration of damaged dryland rivers.

Their status however is under threat. Proposals for major irrigation schemes on the upper Cooper are presently being considered in Queensland. An unprecedented alliance of aquatic scientists, conservationists and Cooper Creek pastoralists has emerged to resist these schemes.

The scientific study of the arid zone rivers of Australia has barely begun. If major irrigation goes ahead, we may be deprived of the chance to understand how these extraordinary rivers work; and, of the opportunity to enjoy their capricious beauty. 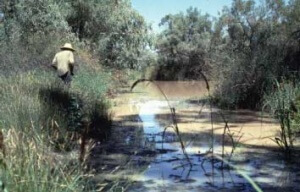