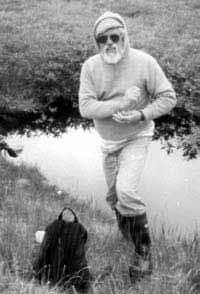 W. John O’Brien, aquatic ecologist and Professor of Biology at the University of North Carolina at Greensboro, died at his home on 15 August 2009. John is survived by his wife, Marion; his son, Connor, and family, Beth (Calvet) and Rowan; and his daughters, Shay and Lia.

John’s career was spent in academia as a scientist and teacher with a passion for ecological research. He accepted a position as an Assistant Professor at the University of Kansas in 1971. He quickly rose through the ranks to Professor in 1982, where he served twice as a Department Chair, as well as one term as Associate Vice Chancellor for Research and Public Service. John remained at the University of Kansas until 2001, and then moved to North Carolina to accept a position as Professor of Biology at the University of North Carolina at Greensboro. John was a central figure in the study of freshwater zooplankton and fish, as well as an ardent experimentalist who delighted in devising ingenious experiments. Throughout his career, John divided his research energy between studying aquatic ecology both in north temperate reservoirs and in arctic lakes and ponds, training students in both venues. In Kansas, 19 graduate students 7 Ph.D. and 12 masters students received degrees under his direction, along with two postdoctoral fellows. In North Carolina, another five students received masters degrees and two more will complete their degrees under the direction of his colleagues.

John completed his undergraduate degree at Gettysburg College in Pennsylvania, and then entered graduate school at Cornell University to work with his major professor, Donald J. Hall. Although the majority of his graduate work was done at Cornell, he transferred to Michigan State University when Don moved there, and it was at Michigan State that he completed his Ph.D. degree in 1970. His graduate research focused on food resource and predator controls of zooplankton communities in experimental ponds, in collaboration with his close friend and lifelong collaborator Jerry deNoyelles. John’s doctoral research resulted in seven publications that launched his highly acclaimed career as an aquatic ecologist, and he soon achieved a national and international reputation in that field. While at Michigan State, John was also strongly influenced by Bob Wetzel’s limnology course, which soon served as a model for John’s own limnology course at KU, and later for his aquatic biology course at UNC-G. John’s research in Kansas reflected its landscape: because there are almost no natural lakes, John studied the limnology of turbid reservoirs. His early research program at KU focused on factors limiting phytoplankton production, and led to a well-cited publication in Science (O’Brien 1972). He also studied the effects of nutrients on diverse waterbodies in the Alaskan landscape, resulting in multiple papers (Bettez et al. 2002, Lienesch et al. 2005, O’Brien et al. 1975, 1992, 2005).

However, John soon shifted the focus of his research interests to zooplankton and fish, and their ecological interactions, reflecting his boyhood curiosity about aquatic animals, inspiration from an undergraduate course at Gettysburg College in invertebrate biology with Robert Barnes, and a sense of an opportunity to contribute to the development of a new emerging area of ecology. Historically, the fields of limnology and fisheries operated independently, but the separation between these two fields of science began to diminish when research showed that fish predation caused shifts in the body size and identities of species present in zooplankton communities. Beginning in the 1970s, John and his students explored zooplankton planktivorous fish interactions by decomposing the act of predation into a series of discrete sequential events location, pursuit, attack and capture. The probability that the predation act will be completed is a multiple of the four separate event probabilities. John felt that this approach

offered an incisive and fascinating way to investigate the interactions between zooplankton prey and their planktivorous predators. Each of the four events could be viewed first from the perspective of planktivorous fish and then from the perspective of the zooplankton prey. John’s pioneering research on fish feeding led to the publication of 28 papers on the fish and zooplankton behaviors underlying fish feeding selectivity, including an influential paper on apparent size as the determinant of prey selection by bluegill sunfish (O’Brien et al. 1976). This line of research culminated in two highly-cited review papers published in American Scientist (O’Brien 1979, O’Brien et al. 1990). Thus, through the insight of his approaches and the resulting publications, John’s research spanned the historic divide between the fields of limnology and fisheries biology, and helped to develop a more detailed and comprehensive understanding of the predator- prey interactions shaping the plankton community structure of lakes.

The largest portion of John’s research career was spent studying the zooplankton of arctic lakes and ponds in the vicinity of Toolik Lake, Alaska. Approximately 60 of his nearly 100 journal articles and book chapters relate directly to his work there, and he edited a book volume on the limnology of Toolik Lake and surrounding lakes and ponds. During his 34-year tenure at Toolik, he trained 2 postdocs, 15 graduate students, and mentored nearly as many undergraduates in arctic limnology. His research at Toolik Lake also focused on the predator-prey ecology of zooplankton, including both fish and invertebrate predators. In this work, he maintained and further developed his interest and contributions to fish foraging behavior, while also making very significant contributions to the ecology of zooplankton communities from several perspectives. Along with his students, John unraveled many of the secrets of helmets and invisible armor in cladocerans; studied prey selection by the large predaceous copepod Heterocope; studied control of pigmentation in arctic zooplankton; and developed an understanding of why moderately large zooplankton can coexist with fish. Collectively, these works and related papers tell a story of zooplankton communities in arctic lakes and ponds, but each of John’s research contributions also provided important lessons for the broader field of zooplankton ecology.

A significant component of the discipline of zooplankton ecology focuses on the evolutionary responses of zooplankton to predators, and how these responses are reflected in the structure and function of plankton communities. A few examples show some of the major contributions John and his students made to this body of work based on their arctic studies. An early paper on helmets and invisible armor (O’Brien et al. 1979) set the stage for this research direction by showing that body protuberances increased apparent size of cladocerans to tactile-feeding invertebrate predators without increasing visibility to visual-feeding fish, suggesting that their body shapes reflected a response to competing selective pressures from a community of predators. Other work examined additional details of zooplankton response to predators. For example, O’Brien & Schmidt (1979) found that the small cladoceran Bosmina evolved an ability to change body shape in the presence of the large predaceous copepod, Heterocope septentrionalis. In another study, Luecke & O’Brien (1983) found that the low diversity of zooplankton species available to colonize ponds was further restricted by this same predator; species that coexisted with Heterocope in ponds were far less vulnerable to that predator than species that did not cooccur with Heterocope, resulting in two distinct pond community types, depending on Heterocope occurrence. John was also interested in how such selective forces translated into landscape-scale patterns in species distribution. In more recent work, he found that despite important direct effects on presence or absence of very large-bodied zooplankton species, fish species distribution among lakes was not an important factor explaining the diversity of zooplankton communities, whereas lake area and depth were major determinants (O’Brien et al. 2004).

John and his students were also interested in how the morphological responses of zooplankton to predators interacted with other environmental factors, such as phototoxicity. Luecke & O’Brien (1981) discovered that a dark red form of Heterocope, which occurred in ponds lacking fish, was due to a photoprotective pigment that conferred higher survivorship for individuals inhabiting shallow sunlit ponds. In deeper lakes that were populated by fish, the concentration of the photoprotective pigment in Heterocope was reduced and combined with a protein to produce a pale green coloration. This pale green morph had poor survivorship in bright sunlight, but was less susceptible to fish predation, and thrived in the deeper lakes. The legacy of John’s work goes well beyond the number and quality of papers that he published, however. John and colleagues at other universities in nearby states recognized the unique and important ecology of reservoirs. In 1974 this group helped to found the Great Plains Limnology Association, an informal group without dues, officers, or bylaws. This group’s annual meeting has since been held for 35 years, rotating among several regional universities, to promote study of Great Plains reservoirs and the differences between these ecosystems and the natural lakes of the northern United States. John was also one of the founding members of the Toolik Lake arctic research community, and played a leadership role in lentic research there for most of his career. John’s early research on arctic lakes contributed to the establishment of Toolik Lake as one of the initial Long-Term Ecological Research sites within the network of this National Science Foundation program. In addition to the scientific productivity of that facility, he left a huge mark on its spirit, sense of community, and future promise. He was a colleague and friend to a family of arctic researchers, who will sorely miss him.

John also provided very strong and active personal support for the building of diversity and inclusiveness in science. For example, John participated in the very first Multicultural Program (MP) offered by the American Society of Limnology and Oceanography in the summer of 1990. John donated his weekend just before the ASLO meeting at the College of William and Mary to spending time with minority students at Hampton University. Two years later, when the practice of having a noted scientist provide a formal presentation to the ASLO MP group was begun, John agreed to give the very first keynote address. John served as a meeting mentor for students in the ASLO MP program several times. He also reached out to minority students at both Kansas and UNCG, bringing those individuals into his lab, as well as to ASLO meetings. In the last few years of his career, he had a regular following of minority students on a weekly basis, often taking them on field trips to local reservoirs.

As noted by Ben Cuker, the best metrics of a life well-lived are perhaps the number of people whom a person touches, and the quality of those interactions. John clearly scored a 100 on both accounts. John was justly proud of the accomplishments of his students and he was keenly aware that, beyond his own research, a large part of his legacy would lie in the lives and work that his students would do when they left his lab. He was also dearly loved by his family, friends, and colleagues as a wonderful story-teller. No one imagined that pancreatic cancer would steal his life away so early, before he had a chance to retire to a quieter private life, but one whose adventures might still be punctuated by storytelling and reminiscing sessions with his lifelong colleagues. We will still tell those stories, laugh and cry, and celebrate his life. A new endowment fund, the W. John O’Brien Award for Ecological Field Research, is being created in John’s memory at UNC-G. This award will be used to assist graduate students who are conducting field-based work, and contributions to this fund can be made out to the UNC-G Excellence Foundation with the notation, John O’Brien Award, and sent to Judy Piper at jrpiper@uncg.edu, UNCG Development Office, PO Box 26170, Greensboro, NC 27402-6170.