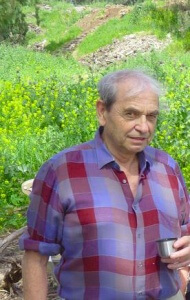 Prof. Tom Berman always wanted to see the Galapagos Islands. At the age of 79 he managed to get there for the first and last time in his life. He died on 13 April while hiking alone on a nature trail in one of the islands. Apparently he took off from the main path and fell on his forehead. To his last day he was healthy, professionally active and extremely productive.

Tom was born in 1934 to a Jewish family in the Czech Republic. Just before the onset of World War II, in 1939, his parents had the amazing foresight and courage to send Tom, their 5-year old son, alone, on the “Kindertransport” train with several hundred other refugee kids, from Prague to Holland, then by ferry to London, to foster families in Britain. This saved Tom’s life, while his parents and nearly all other family members perished in the Nazi concentration camps. Tom was lucky to have a new home and was raised by loving foster parents in Scotland. As a teenager Tom immigrated to Israel in 1952, and settled in Kibbutz Amiad. He later studied Agriculture for his BSc at Rutgers University (1956-1960), and continued with PhD studies in Microbiology at MIT (1960-1964). During his stay in the USA he married Debby, whom he met earlier in Israel and had 2 daughters. The young family returned to Israel and Kibbutz Amiad in 1964 where his third daughter was born.

In Israel, being a young and promising scientist, he was invited to establish the Kinneret Limnological Laboratory as one of the research laboratories of the then new Israel Oceanographic & Limnological Research Ltd. He was one of the founders of the Kinneret Limnologi­cal Laboratory in the late 1960s, its director from 1969-1970 and again from 1986 till his retirement in 1999, a research scientist at the lab in between his terms of directorship, and an active emeritus researcher after his retirement.

Jointly with Collete Serruya, Tom formulated the basic, interdisci­plinary approach of limnological research based on extensive long term lake monitoring that would become a hallmark of the Kinneret Lab policy over the years. They fostered the close ties between monitoring and research, understanding that this combination forms both the basis for future research and the basis for recommendations regarding the management of the lake as a main source of drinking water for the State of Israel. This approach provided an example of how to conduct ecosystem research and contribute to the Kinneret Limnological Laboratory becoming well known internationally.

Throughout his career, Tom nurtured research ties with limnologists and oceanographers all over the world. In the pre-internet era, he did this by spending several sabbatical years at other research institutes (1970-71: Scripps Institute of Oceanography, California; 1976/77: University of Georgia, USA; 1982: Bigelow Laboratory for Ocean Sciences, USA; 1985/86: the University of Hawaii; 1991: the Institute for Meerekunde, Univerisity of Kiel, Germany; 1993: Institute for Ecosystem Studies, Millbrook, NY), by additional short-term visits as research fellow in other countries, by participating in many international scientific meetings, and by hosting overseas guests at the Kinneret Limnological Laboratory.

Tom Berman was an active and prolific microbial ecologist, with a feel for where the scientific wind is blowing and making sure he is always at the frontier. He made major contributions in a wide range of fields. He was one of the first to demonstrate that alkaline phosphatase activity could be used as an indicator of algal P limitation. He pioneered in studies of algal extracellular release of DOC. He discovered deep chlorophyll maxima in Lake Tahoe and in the Eastern Mediterranean, and boasted for the deepest Secchi disc record ever made (54 m, in the Eastern Mediterranean. He studied the uptake of inorganic N and P by phytoplankton and bacteria, and later explored the role of DON and DOP as nutrient sources for phytoplankton in freshwaters. He was one of the pioneers in studies of Protista and the microbial loop. He developed C flux models for Lake Kinneret. Recently he initiated studies of transparent exo-polymers (TEP) in freshwater and their role in desalination technology. Tom Berman published nearly 200 articles in peer-reviewed journals, his most cited articles are listed below.

Tom had a great sense of humor. As a limnologist that grew up in Scotland he published an unsolicited paper in the Journal of Irreproducible Results, entitled: On the nature and numbers of monsters in Loch Ness.

Tom was one of the founding fathers of SIL’s Group on Aquatic Primary Productivity, GAP (jointly with Mitsuro Sakamoto, Zvy Dubinsky and Max Tilzer) and its first chairman, from 1980 till 1992. Through its bi- or triennial International Workshops, GAP introduced the concept of true “work” meetings where both freshwater and oceanic researchers bring specialized equipment and carry out collaborative “state of the science” studies during the Workshop that are then published after peer-review.

At the SIL meeting in Budapest in August 2013 a special session was held to commemorate Tom. After an opening presentation entitle ‘Tom – the man and the scientist’, with photos from his long scientific career, colleagues and past-time students gave presentations on scientific topics MASHIKIM to Tom’s research interests, and highlighting Tom’s input to those studies, whether direct or indirect. The room was full throughout the session, during some lectures there were no seats available.

Tom was a gifted writer, and wrote not only science but also English poetry of which he published 2 volumes (“Shards”, and “Rambles”). Tom Berman left behind his wife Debby, his three daughters, Ilana, Rena and Ora and seven grandchildren.

Berman T 1987. On the Nature and Numbers of Monsters in Loch Ness. J. Irreproducible Results 33: 19.