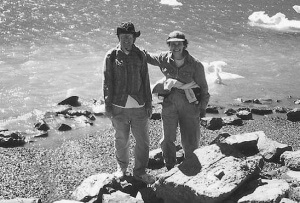 Stanley I. Dodson, aquatic ecologist and recently-retired Professor of Zoology at the University of Wisconsin, died on August 23, 2009, following a cycling accident at the Colorado National Monument. Stanley is survived by his wife Ginny, his daughter Sarah, and two grandchildren (Kate and Henry).

Stanley grew up in Illinois and Colorado, and completed his undergraduate degree at Yale. Here he had the opportunity to do undergraduate research with John Brooks, work that was published in a paper in Science and has been widely read by limnologists. Stanley then completed his Ph.D. work at the University of Washington, where he was supervised by Tommy Edmondson.

Stanley was a professor at the University of Wisconsin in Madison for his entire 40-year professional career. Here, he supervised postdoctoral fellows and countless environmental interns. Stanley taught undergraduate courses in limnology and general ecology, and graduate courses in plankton ecology. He wrote a widely-used textbook for limnology, co-wrote and edited two books in ecology, and co-authored monographs on zooplankton of the Laurentian Great Lakes and insects of Rocky Mountain streams. Stanley was locally famous for his imaginative teaching techniques, and offered many suggestions to others on presentation methods.

Stanley had broad research interests and made major contributions in five topic areas. He is best known for his research on the role of predation in shaping the size structure of zooplankton communities. His undergraduate research with John Brooks examined the importance of size-selective planktivorous fish in selecting for small-bodied communities, and proposed the Size-Efficiency Hypothesis for explaining why large-bodied communities dominate in the absence of fish. The latter hypothesis was tested during Stanley’s graduate research on high-elevation pond communities and was largely rejected in favor of the invertebrate predation hypothesis. A second area of Stanley’s research was his work on cyclomorphosis and the role of predator chemical cues (kairomones) on anti-predator defenses of their prey. He proposed an hypothesis early in his career at Wisconsin and later he and his graduate students tested it with a series of clever experiments. We now know that such chemical signaling is widespread in nature and affects not only development of morphological traits but also antipredator behaviors as well.

A third theme of Stanley’s research corresponded to the factors that influence biodiversity in lakes. He and his students and collaborators examined the importance of lake area, age, and productivity on species richness. All these factors proved important. Nevertheless, watershed land use, particularly the conversion of littoral zones to manicured lawns, was a dominant influence on diversity in aquatic communities. Over the years, Stanley also became increasingly interested in chemical contamination of lake communities. Much work was done to shed light on the interaction of anthropogenic and natural chemicals on the invertebrate community structure. The influence of endocrine disruptors extended to Daphnia sex ratios and Stanley received a U.S. patent for the bioassay method.

Stanley was an excellent taxonomist. He is well known by both cladoceran and copepod taxonomists for his careful and imaginative work. He and his students described new species and helped sort out problematic groups in both taxa. At the time of his death, Stanley had been working on taxonomic revisions of two copepod genera (Diaptomus and Eurytemora), combining painstaking measurements of 30+ morphological features with multivariate and phylogenetic analyses. Given his expertise in both ecology and systematics, Stanley was the natural choice for lead author of the cladoceran chapter in Thorp and Covich.

Perhaps Stanley’s greatest legacy was his continuous mentorship of graduate students at all phases of their professional careers. He was truly a friend to many and his impacts are lasting. Stanley also provided extensive service to the professional community, including terms on the boards of editors for Ecology and Hydrobiologia. His service to Hydrobiologia is noteworthy both for its length (15 years) and for his patient work with writers whose first language is not English.

Stanley Dodson had a major influence on aquatic ecologists, with imaginative approaches to some of the major questions that continue to fascinate us. He loved what he did and enjoyed sharing his insights with others. The limnology community has lost a creative scientist and a loyal friend.