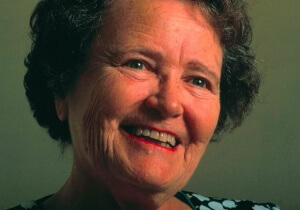 Ruth Patrick has died, at the age of 105 years, having made numerous, significant contributions to our understanding of aquatic ecosystems and specifically the ecology of diatoms in them, and the impacts of environ­mental pollution generally.

Born at Topeka, Kansas, USA on 26 November 1907, Patrick’s life-long interest in nature was cultivated at an early age by her father, who gave her a microscope when she was 7 years old. After graduating from the Sunset Hill School for Girls at Kansas City, she attended Coker College at Hartsville, South Carolina, earning a baccalaureate degree in 1929. She went on to the University of Virginia where she obtained masters and doctoral degrees, the latter in 1934. Beginning in 1933 as a graduate student, she became associated with the Academy of Natural Sciences at Philadelphia, an affiliation that would persist for over 70 years. Patrick was an early specialist in the study of diatoms, and an advocate for their use in monitoring aquatic pollution. Initially a voluntary curator of microscopy at the Academy, Patrick undertook to unify its diverse diatom collections into a single, comprehensive herbarium that would become one of the largest in the world. In 1945, she was given a paid position and, two years later, she established the facility’s limnology department—renamed the Patrick Center for Environmental Research in 1983.

In 1948, Patrick led a pioneering study on the relationship between diatom species abundance and water quality in rivers, based initially on studies in Pennsylvania but later expanded to South Carolina, Louisiana, Tennessee, Texas, and elsewhere. Her work led eventually to more than 200 scientific papers and several books. Among her most important contributions were two treatises, published in 1966 and 1975, on the diatoms of the United States, co-written with the late Charles W. Reimer. For over 35 years, she also taught limnology and botany at the University of Pennsylvania.

Patrick served on the board of directors for the DuPont Company (the first woman to do so) and the Pennsylvania Power and Light Company. She advised US Presidents Lyndon Johnson and Ronald Reagan on pollution issues, and served on panels of the National Academy of Sciences, the US Department of Interior, and others. Her exemplary scientific achievements were recognized by numerous awards, including a Lifetime Achievement Award from the American Society of Limnology and Oceanography (1996), the Pennsylvania Award for Excellence in Science and Technology (1970), the Eminent Ecologist Award from the Ecological Society of America (1972), the Gold Medal from the Royal Zoological Society of Belgium (1978), and the Benjamin Franklin Award for Outstanding Scientific Achievement (1993). Elected to the National Academy of Sciences in 1970 and the American Philosophical Society in 1974, she received the National Medal of Science from US President Bill Clinton in 1996 and was inducted into the US National Women’s Hall of Fame in 2009. She held 25 honorary doctorates.

Ruth Patrick died at Lafayette Hill, Pennsylvania, USA on 23 September 2013, having outlived two husbands. She is survived by a son, several stepchildren and grandchildren, and numerous diatomists in the US and around the world whose careers she had mentored.