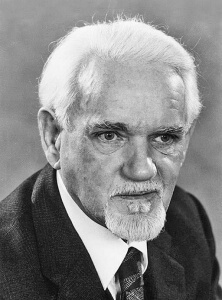 Richard A. Vollenweider passed away peacefully on January 20, 2007, at the Hampton Terrace Care Centre in Burlington, Ontario, after a long illness resulting from a stroke more than two years ago. He is survived by his loving wife, Roberta, his brothers Karl and Kurt, and his nieces and nephews: Irene, Franz, Marcel, Ursula, Werner, Walter, Silvia and Roland. Thanks to the staff of Hampton Terrace for attending to Richard’s daily needs.

Born on 27 June 1922, in Zurich, Switzerland, Richard completed a graduate degree at the University of Zurich. He studied the dynamics of life in inland waters in Sweden, Egypt and Italy before undertaking his monumental analysis of nutrients and plant growth in lakes (eutrophication) for the Organization for Economic Co-operation and Development (OECD). In 1968, he completed his now classic study under the OECD (Organization for Economic Cooperation and Development) in Paris of Scientific fundamentals of the eutrophication of lakes and flowing waters, with particular reference to nitrogen and phosphorus as factors in eutrophication. It was then that he was lured by Wally Johnson of the Fisheries Research Board of Canada to head the Great Lakes biological detachment at the Canada Centre for Inland Waters (CCIW) in Burlington, Ontario. Later Richard became Senior Scientist at the CCIW in the federal Department of the Environment.

Richard’s analysis under the OECD provided the foundation for a multi-million dollar, seven-year study under the International Joint Commission of transboundary pollution in the lower Great Lakes (1963-1970). It latter also paved the way for a major OECD study of the causes and control of eutrophication in 18 countries, at 50 institutes, and of 200 water bodies over a period of 15 years. For this and earlier work with OECD, he received an Award of Excellence from the Rawson Academy of Aquatic Sciences. He shared the prestigious Tyler Environmental Prize with Werner Stumm in 1986. Many honours and awards for Richard’s work included the coveted Naumann- Thienemann Medal of the International Association of Pure and Applied Limnology (SIL) in 1987, the Premio Internazionale Cervia for work on eutrophication of the Adriatic Sea, membership in UNEP’s Global 500 Role of Honor, and an honorary degree from the University of McGill. Enormous knowledge and uncompromising thoroughness were the prime qualities that characterized his work. Richard paved the way for the study of inland waters and their drainage basins as open systems – rather than as microcosms. It is extraordinary that his 1966-68 OECD study was never properly reviewed or published in the scientific literature; nevertheless, it achieved the level required for recognition as a Citation Classic based on the number of citations in the scientific literature. Richard loved the mix of good conversation, food and wine. It was these characteristics, in fact, that brought him and Wally Johnson together. One of these occasions was at a Spanish restaurant in Paris after a heavy, day-long OECD meeting. That evening later decided the matter: Richard, if offered the opportunity, would later move to Canada.

At the CCIW, Richard protected people and functions vital to good research when they were threatened with bureaucratic redirection or closure for trivial reasons. In every sense, he was well suited for the role as Senior Scientist at the CCIW. He was a leader. We are honored to have had him in our presence.