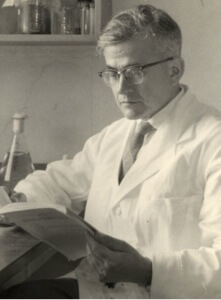 John Lund; Distinguished Microbial Ecologist whose methods were emulated by three generations of scientists passed away at the age of 102 years

John Walter Guerrier Lund of Ambleside was acclaimed for his work on microalgae and, especially, the ecology of the planktonic diatom, Asterionella, that continues to dominate the algal “bloom” almost every spring in the waters of Windermere. The alga occurs in many other temperate lakes, where, despite its microscopic size (cells barely 0.1 mm in length), popular familiarity with its beautiful star-shaped colonies owes in no small way to the work of Lund, his late wife, Hilda, and the research group he founded at the Windermere Laboratory of the Freshwater Biological Association. Dr Lund sadly passed away at his home in Ambleside on Saturday, 21st March 2015 at the age of 102.

John Walter Guerrier Lund, CBE, D.Sc., FRS, FIBiol, FCIWEM, was born in Manchester on 27 November 1912. He attended Sedbergh School in Yorkshire before starting the next stage of his studies at Manchester University, where he obtained his B.Sc. and M.Sc. degrees. He was attracted initially to zoology but changed to botany acquiring the only first class honours of the 1934 year class, despite having no science education at school. In 1935 he moved to University College, London to work on benthic algae under Professor F. E. Fritsch, then one of the country’s leading phycolo­gists, and gained his Ph.D. in 1939. He then worked at the West Midlands Forensic Science Laboratory in Birmingham, for several years as a forensic botanist. However, in 1944, he joined the staff of The Freshwater Biological Association (FBA) as an algologist. He began his work on the ecology of planktonic algae of the English Lake District, initially at Wray Castle and then from 1950 at the Association’s famous premises at The Ferry House. He continued in this post until retiring, officially, in 1978, as a Deputy Chief Scientific Officer, although he continued to work several days a week at The Ferry House until 2005.

John Lund’s research work on the nature and activity of phytoplank­ton was always imaginative and thorough and extremely influential. He discovered, described and brought into laboratory culture, many new species of algae, especially of the rarer chrysophytes and xanthophytes. His studies on the distribution, seasonality, population dynamics and ecological requirements of various planktonic species were prolific and often detailed. The accumulated data on Asterionella has remained a prime example for the conduct of analytical research. John often devised experiments, of growing scale and ingenuity, to test his hypotheses about the mechanisms controlling algal growth. In the 1960s, he began a series of field experiments employing in situ artificial enclosures of increasing size, realism and complexity: these passed from the cylindrical “bags” deployed in Buttermere, the partitioning of Blelham Tarn with plastic curtains and, ultimately, to the majestic butyl tubes, or mesocosms, placed in that Tarn. They measured 45 m in diameter, extended 11-12 m to the bottom mud and each enclosed some 18,000 m3 of water and became known as the “Lund Tubes”. Using such lake-sized isolates, it became fully possible to investigate and experiment with natural populations of phytoplankton under contrived and manipulated conditions. These “Lund Tubes” continued in use by other scientists from the FBA and elsewhere, until 1984.

During this time, he worked with a fellow scientist, Hilda Canter, whom he later married. Together, they studied the intriguing range of fungal parasites that infect algae, publishing a series of papers on their taxonomy and life-histories which have scarcely been emulated. Rather later on (1995), they published their handsome album of photographs, Freshwater Algae – their microscopic world explored (Biopress, Bristol), with Hilda providing the photomicrographs and John the text. This remains an excellent introduc­tion to the remarkable beauty of these organisms, unknown and possibly unimaginable to many people. John was awarded the Prescott prize by the American Phycological Society in 1997.

Another of John’s activities concerned the curation of the remarkable Fritsch Collection of Algal Illustrations. This archive of line drawings, copied from the contemporary literature, and started by Professor Fritsch, was given to John and the FBA in 1955; aided by a series of able and dedicated assistants, it was curated, catalogued and progressively expanded at The Ferry House, into a quite unique world resource, supporting the identification and taxonomy of freshwater algae.

A feature of John’s work was the close working collaborations he formed with colleagues. These included Dr Jack Talling FRS, the ecophysiologist whose work on algal photosynthesis revealed the great importance to produc­tivity of the scale and extent of the variability in underwater light conditions. He collaborated extensively with chemists, John Mackereth and Jack Heron, and zoologist-turned-physicist Clifford Mortimer FRS. He also encouraged a series of assistants and students to develop special interests and talents, in various specialisms – culturing algae, algal bioassays, sediment accumula­tion and stratigraphy, eutrophication (artificial enrichment of waters with fertilisers and sewage effluents). In doing so, he promoted the continuing ability of freshwater science to cultivate the good biological management of lakes, reservoirs and rivers that is so often threatened by ignorance and inexpert supposition.

John was an admirable colleague. Apart from his sharp intellect, he had an acute memory. He was still able to supply clear details of people and events occurring through his career, even up to and slightly beyond his 100th birthday! His sense of humor was legendary. His laughter, robust and hearty, penetrated the corridors and stair wells of The Ferry House. He – assisted frequently by John Mackereth – would sometimes devise elaborate, convincing practical jokes, often directed towards his colleague Clifford Mortimer.

John travelled extensively, contributing at scientific meetings or advising on projects overseas. He learned to read and speak Russian, quite fluently and wrote at least one paper in Russian on the suspension of another, common but perplexingly heavy, planktonic diatom, Melosira (later renamed Aulacoseira). It is said, though with little factual accuracy, that John was minded to learn Russian so as to be able to translate the mammoth volume on algal taxonomy by Korshikov, only then to discover that it was written not in Russian but in Ukrainian!

At home, John collected many accolades, including election as a Fellow (for a time Chairman) of the Royal Society in 1963, the award of a C.B.E. in 1965; and President of the British Phycological Society. He remained loyal to the FBA, championed its work ethic and, indeed, its very existence. He despaired over its contraction in the face of Government-inspired reorganisa­tions of its science base and the dissipation of its expertise. Throughout, John nevertheless remained as many of us had come to know him: charming and unassuming, warm, friendly and caring, with this wonderful sense of humor. He will be greatly missed. Our condolences extend to his son and to his daughter and their families.