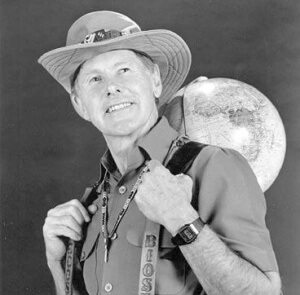 Dr. Jack Vallentyne died peacefully in his sleep at his home in Hamilton, Ontario, Canada, on Saturday, June 16th. After cremation, his ashes were scattered in Lake Superior, which he loved and cared for immensely. He is survived by his wife Ann, children Peter, Stephen, Jane, Anne-

Marie and Geoffrey, and five grandchildren.

John Reuben Way Vallentyne was born in Toronto Ontario on 31 July 1926. Following three years of military service in 1943-45, he finished his undergraduate degree at Queen’s University, Kingston, Ontario, in 1949 and then went on to Yale University. Here he did his Ph.D. with G. Evelyn Hutchinson, finishing his thesis research on pigments in lake sediments in 1952.

The University Phase Vallentyne’s career as a limnologist and biogeochemist began in academia. He was a lecturer, and then an assistant professor at Queen’s University from 1952 to 1958. He was a Fellow of the Carnegie Institution of Washington Geophysical Laboratory in Washington, D.C. (1956-57), where he started work on the thermal stability of amino acids and sugars and fossil proteins, with Philip Abelson. He then moved to Cornell University as Associate, then full professor of zoology, and remained there until 1966. According to some of his former students (S. D. Ludlam, R. H. Green, A. Sheldon, G. J. Brunskill), during his tenure at Cornell, Vallentyne had catholic interests, including cosmochemistry, molecular evolution, pheromones, chemical ecology, paleolimnology and the history of science. His Advanced Biogeochemistry Seminar Course was held in the back room of a pub in downtown Ithaca, complete with a slide projector and pitchers of beer. During his time at Cornell University (and later in life), he was actively involved in dramatic productions, and he enjoyed the grease paint and spot lights of the thespian life. During this period, he also spent a year at the Tonolli Laboratory in Italy as a Guggenheim Fellow.

Dr. Vallentyne enjoyed using foreign languages to express concepts that were difficult in the English language, and he had reading knowledge of French, Russian, Italian, Spanish and German.

Following attendance at a Gordon Conference in 1966 where using whole lakes as test tubes was a topic of discussion, Vallentyne left Cornell to join W.E. Johnson in forming a new, as yet unformed, institute in Winnipeg, Manitoba, where whole lake experiments with eutrophication were to be a major part of the Fisheries Research Board of Canada’s freshwater program. Johnson was the Freshwater Institute’s first director, and Vallentyne headed the new eutrophication section.

It was at this point, in January of 1967, that I (DWS) first met Jack. He invited me, then a young assistant professor at Trent University, to visit the new Institute, that was housed in a small building rented from the University of Manitoba. As we toured the empty building, Jack told me how he planned to fill it with the world’s best limnological minds. I was cynical: To say this about Winnipeg, noted for its ferocious winters, and at a small university. You must be insane! I returned to Trent. A year later, Vallentyne phoned to persuade me to visit again. I was flabbergasted to find that he had fulfilled his boast, recruiting Richard Vollenweider, Kazimierz Patalas, Arnold Nauwerck, F.A.J. Armstrong and Domenico Povoledo from Europe and Mitsuru Sakamoto from Japan, to name the experienced scientists. There were also a large group of us in our mid 20s to early 30s, including Gregg Brunskill, Andy Hamilton, Ole Saether, Bob Hamilton, Stefan Holmgren, John Stockner and myself. Soon to follow were Ev Fee, Bob Hecky, Bob Newbury and H. W. (Buster) Welch. It was a group of tremendous intellect and energy, and the Freshwater Institute was a very exciting place to be.

The Experimental Lakes Area was to be one of the new Institute’s foci, and I was rather speechless when Jack asked me, one of the youngest recruits, to lead it. But the novel way in which Jack ran his section made it possible. In the early years, we had frequent meetings and numerous hot debates on new programs and new experiments. We were encouraged to be merciless and open in our critiques of the science of other members of the section. The philosophy as Jack once put it was “If you think your friends’ critiques of your science are harsh, wait until your enemies get hold of it.” Decisions were made by consensus.

In addition to the ELA, Jack established a Fisheries Research Board detachment at the Canada Center for Inland Waters in Burlington, Ontario, to complement the physical and chemical programs of that institute. Vollenweider was appointed to head that unit. Others were assigned to the Regional Limnology group, to develop a broad knowledge of Canadian lakes.

Vallentyne became well known for his leadership in the debate over control of the eutrophication problem in the St. Lawrence Great Lakes. He used data from a large unpublished report by Richard Vollenweider and from early experiments at the Experimental Lakes Area to clearly and successfully rebut a Madison Avenue-style campaign by detergent manufacturers and convince the International Joint Commission (IJC) to recommend regulation of phosphorus inputs to the Great Lakes.

Unfortunately, in the early 1970s the Fisheries Research Board (a Crown Corporation, not a government department) was disbanded, and its activities were moved first to Environment Canada, later to the Department of Fisheries and Oceans. Jack announced that he would be stepping down as section leader, because there would be little room for scientific leadership within the civil service. He remained a Senior Scientist in the department until his retirement, but moved his offices to the CCIW in Burlington in 1977, a more convenient location for his next activity, to co-chair the Great Lakes Science Advisory Board of the IJC. He influenced the IJC to change from a water quality focus to an “ecosystem approach” that would include the watershed and airshed of the Great Lakes. During this period, he planned the public outreach for which he would become renowned in later life.

On the 20th of July, 1980, Vallentyne launched the Johnny Biosphere project. From personal conversations, I knew that he was becoming discouraged with the rate at which adults were solving Earth’s environmental problems. He moved his hope to new generations, whom he hoped might be influenced by the introduction of environmental sensibilities early in their lives. Jack often appeared in public wearing a safari suit and carrying a globe on his back, shocking some of his more staid scientific colleagues. But Johnny Biosphere delighted children world-wide, visiting up to 100 schools and 20,000 children a year where his basic message was” be kind to the Earth and it will be kind to you.” Johnny’s website has gotten many thousands of visits, and it remains active for now.

Vallentyne also received many awards. He was especially proud of two. In 1992, Vallentyne was awarded the Rachel Carson Award for raising public awareness of science from the Society for Environmental Toxicology and Chemistry. In 2001, he received the American Society of Limnology and Oceanography’s Lifetime Achievement Award for his tireless work in limnology and public awareness.

Active until his final days, in 2006 Vallentyne authored “Tragedy in Mouse Utopia: An Ecological Commentary on Human Utopia,” Trafford Publishers (www.trafford.com/05- 0531). Four days before his death, I was able to tell him that our revised edition of “The Algal Bowl” had been accepted by the University of Alberta Press. It is scheduled for publication in late 2007 or early 2008.

Those of us who knew Jack are grateful for the opportunities he provided us. But Jack is still out there in Lake Superior, with his quiet inscrutable smile, waiting to help another young scientist to discover a new paradigm in limnology and biogeochemistry. He is also probably watching to see who will take responsibility to continue the Johnny Biosphere task.