Fr. Angelo Secchi, S.J. and the Voyage of the Immacolata Concezione 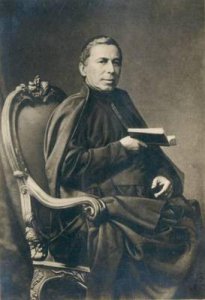 Fr. Angelo Secchi, S.J. (pronounced SEK-kie)* may be the most famous scientist you have never heard of. He is considered a pioneer in the field of astrophysics, and his scientific contributions cover fields as widely varied as stellar spectroscopy, solar physics, terrestrial magnetism, meteorology, and oceanography. One of his long-lasting contributions in an unexpected niche is the development of a technique for measuring the clarity of ocean water, which today is widely used not only in open seas, but also in bodies of fresh water.
This year marks the 200th anniversary of Angelo Secchi’s birth in Reggio Emilia, Italy. He entered the Jesuit order in Rome at age 16, and his formators recognized his aptitude for science and encouraged him in that direction. He was ordained a priest in 1847. Due to political unrest in Rome at the time, he spent a couple years abroad, first at Stonyhurst College in England, and then at Georgetown University in Washington, DC. During this brief sojourn, he broadened his horizons and was exposed to new ways of thinking.
In 1849, he returned to Rome, where he was asked to become director of the Roman College observatory, despite the fact that his scientific training was in physics and not in astronomy. He found the existing facility poorly suited to contemporary needs, and constructed a new observatory atop the church of St. Ignatius, adjacent to the Roman College, and commissioned new instruments including a Merz equatorial refractor (one of the best telescopes of the day). 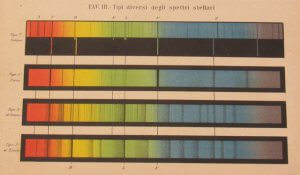 At the time, astronomy was concerned only with measuring positions, brightnesses, and proper motions of stars and other celestial objects, but he took his physics training and applied it to astronomical phenomena. Secchi, aware of developments by scientists such as Kirchoff in understanding the spectra produced when light emitted by various chemicals is broken up into its rainbow of colors, adapted astronomical instruments for stellar spectroscopy. He classified several thousand stars based on their spectral signatures, and even attempted to identify the chemical elements present in these signatures. The classification work by Secchi formed the foundation upon which astronomers at the Harvard Observatory later developed the classification system we use today.

Secchi also studied solar physics and solar phenomena, with considerable contributions to our understanding of sunspots, prominences, and solar activity. During an eclipse in 1860 he collaborated with Warren de la Rue of the Royal Society of London to photograph solar prominences and compare the results. At the time, some thought that prominences were an optical illusion or caused by atmospheric phenomena on Earth. But observations made 250 miles apart came up with the same result, confirming that solar prominences are actually features of the Sun. Secchi also made spectrographic studies of solar prominences. He published his groundbreaking studies on solar phenomena in 1870 in a book entitled Le Soleil.

Secchi’s areas of scientific varied widely; he had an innate curiosity about the world and sought to apply physical principles to everything. He built an electromagnetism facility to measure variations in the Earth’s magnetic field. He developed meteorological instruments to measure changes in atmospheric conditions and predict storms and set up one of the first networks of weather stations, a precursor to the development of national weather services. He contributed to geodesy, which is the measurement of the shape of the Earth and the precise positioning of various locations on it. One of the more unexpected and long-lasting contributions that Secchi made was in the field of oceanography; namely, in the measurement of the clarity of ocean water.
Prior to Secchi’s work, there had been several attempts by other scientists to study the clarity of seawater. Often, this involved retrieving a sample in a clear glass container and examining it by eye. A few expeditions had experimented with lowering brightly painted objects into the water until they were no longer visible, but there were no standards by which to compare or interpret the results of these experiments. A call was put forth to try to systematize these measurements. 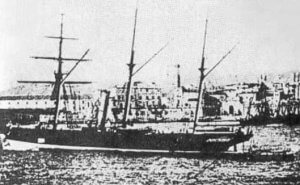 In 1865, Commander Alexander Cialdi invited Angelo Secchi to accompany him on the Immacolata Concezione, a corvette of the Pontifical Navy (at a time when the Papacy still had a small navy), with the idea to develop techniques for measuring water clarity. Secchi readily accepted, and applied his considerable intellect to the problem. He developed a plan of study to systematically control for several variables that may affect the results that one obtains from measuring clarity by immersion of bright disks into the water. These variables include the size and color of the disk, the brightness of the Sun (i.e. the presence or absence of clouds), the angle of the Sun (i.e. the time of day), the viewing angle, distance, and eyesight of the viewer, whether the disk was in shadow or bright sunlight, the sea depth, and the quantity of plankton in the water.
The experiments were conducted in the Mediterranean several miles off the Italian coast, and lasted from 20 April until the start of June of 1865. He used disks of varying sizes up to 3.7 meters (12.2 feet) in diameter. From these experiments, he determined the optimal parameters for the use of a disk to measure water clarity, and ways to interpret the results. In subsequent years, the white disk became standard equipment for such studies, and the relevant measure of the depth of visibility became known as the Secchi depth. The disk idea was also adapted for fresh water, with a design of alternating white and black segments developed by George Whipple in 1899. He and the founder of the field of limnology, François-Alphonse Forel, named the disk in Secchi’s honor, and even today the simple instrument is known as a Secchi disk. (There is a nice video a Secchi disk being used in fresh water, posted by the Lakes of Missouri Volunteer Program, on Youtube at https://www.youtube.com/watch?v=-6NUx98EcHA).

When Italian forces conquered Rome in 1870, they confiscated all of the properties of the Catholic Church, including the Roman College and the church of St. Ignatius, where Secchi’s observatory resided. In his day, he was very well respected among scientists and the public in general, and so the Italian government permitted him to continue directing the Roman College Observatory, but without funding. When he died in 1878, the government confiscated all of his scientific equipment and distributed it to State-run observatories. Anti-clerical sentiment in Italy was at a peak at this time, and as a result his scientific contributions were largely ignored or forgotten after his death.
Today, however, Secchi’s memory is resurfacing. His name and legacy lives on not only in the Secchi disk and the Secchi depth, but elsewhere as well. There are craters on the Moon and on Mars that are named in his honor, as well as the asteroid 4705 Secchi. In honor of Angelo Secchi’s contributions to solar physics, there is an instrument package on the pair of STEREO solar observatory satellites that is named “Sun-Earth Connection Coronal and Heliospheric Investigation” (SECCHI). In his hometown of Reggio Emilia, there is a street named after him as well as a high school (Istituto Tecnico Statale per Geometri Angelo Secchi). In addition to those things that bear his name, his legacy continues in the numerous contributions he made to science that form the foundation upon which several fields of research developed.