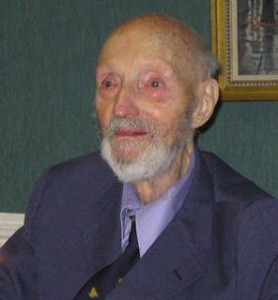 Clifford H. Mortimer graduated from Manchester University with a degree in Zoology in 1932. He began his career studying cladocern genetics in Berlin that year and completed his Dr. Phil. Degree at Berlin in 1935. He returned to Britain that year to the Lake Windermere Laboratory of the Freshwater Biological Association to conduct chemical analysis of lake water. These studies drew his attention to the sediment-water interface and the importance of oxidation-reduction potential gradients that influence seasonal processes in lakes. Two papers published in 1940 and 41 have become classics.

During World War II, Mortimer served as a civilian scientist in the British Admiralty Research Laboratory. He worked with a group measuring waves in the English Channel and forecasting wave conditions in support of military operations. His experience there with a cadre of oceanographers and hydrodynamicists gave him a taste for interpreting the periodic motions of the sea, which became his lifelong passion and the focus of his scientific research.

After World War II, Mortimer pioneered the investigation of internal waves in lakes. He became interested in the dynamics of Lake Michigan during visits to the U.S. in the 1950’s and 60’s. He discovered that temperature records at domestic water intakes in Lake Michigan enabled him to deduce internal motions in the lake. Nearly 30 papers were published on lake motions in English lakes and Lake Michigan.

The 1950’s and 60’saw major changes in Professor Mortimer’s career. In 1956 he assumed the directorship of the Scottish Marine Biological Laboratory in Millport. In 1966 he was offered a Distinguished Professorship of Zoology at the University of Wisconsin-Milwaukee and the Directorship of a newly formed Center for Great Lakes Studies.

The 1970’s were busy with administrative duties and service to professional associations. He was elected President of the American Society of Limnology and Oceanography in 1970 and served as President of the International Association for Great Lakes Research in 1973. There was also a flurry of research activity with graduate students and post doctoral fellows collecting data on cruises and analysis of physical processes in Lakes Ontario and Michigan. There were 8 papers published during the decade. Professor Mortimer’s classic paper, Lake Hydrodynamics, was published in 1974 (Mitt. Internat. Verein. Limnol. 20:124-197).

In 1985 he was awarded an Honorary Degree of Doctor of Science by the University of Wisconsin-Milwaukee and in1987 he was granted an Honorary Docteur Degree at Ecole Polytechnique Federale de Lausanne. In 1981 he retired and was granted Distinguished Professor Emeritus status. Concurrently, he was awarded “Life Membership” by the American Society of Limnology and Oceanography. Work continued with European and British colleagues on the internal motions and biology of Swiss lakes (four publications), and a paper examining water motions in Green Bay, Lake Michigan using numerical models.

A book titled, Lake Michigan in Motion: Responses of an Inland Sea to Weather, Earth-Spin, and Human Activities, was published by the University of Wisconsin Press in 2004, 28 years after Professor Mortimer’s retirement. The book chronicles three centuries of observations of the Great Lakes by native peoples, early explorers and contemporary scientists. The physical geography and geology of the basin is covered along with chapters on sediment and water chemistry, ecology, human influences, and the internal motions of waves and currents.

In 2006 at age 95 his final publication appeared in Limnology and Oceanography (51:1914-1955) titled, Inertial oscillations and related internal beat pulsations and surges in Lakes Michigan and Ontario. At age 99-plus he had completed the penultimate draft of a paper examining variables influencing the density of freshwater. This paper will be submitted posthumously as Professor Mortimer died peacefully on May 11, 2010.