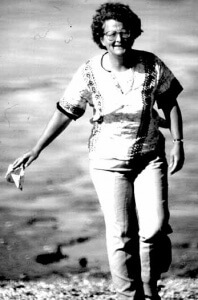 Mary Burgess, Editor of SILNEWS since its inception 12 years ago, handed over the reins of editing to Richard Robarts of the GEMS/WATER Collaborating Centre at the recent SIL Congress in Dublin. Mary’s contribution to SIL in her role as editor of our newsletter has been considerable – particularly so, given that it is a task that she did not seek, or even offer to do! According to Mary, ‘It was Charles Goldman who sat me down during the New Zealand SIL Congress (in 1987) and asked me if I would start this newsletter. I would certainly never have thought of [starting] it so I cannot take credit for [the idea].’

Over the past 12 years, Mary from her base in the UK, has worked closely with General Secretary Robert Wetzel, to produce 25 editions of SILNEWS. Although many members contributed information for SILNEWS, Mary persisted in seeking information, cajoling individuals for specific contributions, and generally advocating the needs for active communication among SIL members. Mary brought a range of skills to the task, among them her knowledge and experience of desktop publishing through a part-time scientific translation business that she and husband, Dr. Pat Morris, run from their home just outside London, and a wide network of limnological colleagues and contacts throughout the world, many of them gained during her association with the IBP (International Biological Programme) freshwater projects in Africa in the late 1960s – early 1970s.

Mary gained her Ph.D. from the University of London (Royal Holloway College). Subsequently, she joined the academic staff of the University of London Polytechnic, where she taught for many years prior to her recent retirement. Her limnological interests are wide-ranging, but have concentrated in zooplankton and interactions with fish. Over the past 30 years Mary has maintained her limnological contacts through attendance at conferences, especially those of SIL and FBA (Freshwater Biological Association, UK), correspondence, and a steady stream of limnological colleagues who have found the home of Mary and Pat Morris, just outside London, a convenient and congenial haven on the way to other parts of the world.

Although Mary’s editiorial responsibilities for SILNEWS have now terminated, she will hopefully be participating in other editing tasks, particularly those associated with the Occassional Publications of SIL, a series devoted to improving the training of limnologists in developing countries. We all owe her our sincere thanks for producing and editing SILNEWS for the past decade, and doing it with flare and enthusiasm. It is an informative and attractive newsletter in which SIL can take pride.