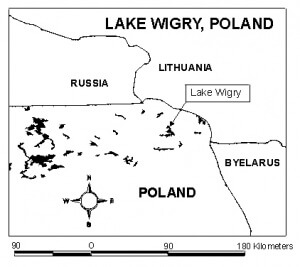 Lake Wigry is situated in the Wigry National Park (150 km2) in the north east corner of Poland, close to the Lithuanian border. The Park is covered extensively with mixed forest and contains forty other lakes varying greatly in character from dystrophic, oligotrophic, and mesotrophic, to eutrophic. Lying within the same catchment, Lake Hancza (max. depth 108 m), is the deepest lowland lake of central Europe. Lake Wigry is a sinuous mesotrophic ribbon lake (area 21.1 km2, max. depth 73 m). The different basins, separated by islands and peninsulas, lead to isolation of water masses and habitat differences (trophic, thermal and oxygen conditions) in separate areas of the lake.

About 90% of the shoreline is bordered by emergent vegetation dominated by Phragmites down to a depth of 1.5 m. Submerged macrophytes occur down to a depth of 4.5 m and cover about 13% of the lake bottom. Due to reduction in water transparency, some photophilous species, such asChara sp., are decreasing in number whereas species tolerant of shade are increasing (e.g., Fontinalis, Ceratophyllum). The plants are often covered with calcareous encrustations and the intensity of biological decalcification and the role of this process in phosphorus circulation and eutrophication of the lake are unknown.

The bottom in the littoral varies from calcareous gyttya to organic mud, gravel and sand. In the latter, Wiszniewski discovered a community of psammon rotifers in which were three new genera: Wigrella, Wierzejskiella and Myersina and 14 new species of other genera of rotifers. The macrobenthos is poorly known, but preliminary investigations found 13 taxons of Gastropods, 6 species of large mussels plus an unknown number of Sphaeriidae. As biomass, the dominating species is Dreissena polimorpha. In the deeper parts of the lake there are old records of the presence of rare and relict species of crustacean: Mysis relicta, Pallasea quadrispinosa and Pantoporeia affinis.

The zooplankton is species rich. Of unusual interest is the number of rare or relict species such as: Daphnia longiremis, Eurytemora lacustris, Heterocope appendiculata and Holopedium gibberum. The cladocera are particularly rich with co-occurrence of many species of the same genus.

The fish community is dominated by species which feed on zooplankton yet large species of zooplankton occur commonly.

Thirty two species of fish have been recorded. At the beginning of this century the numbers of coregonid fish dropped dramatically. A hatchery was built and stocking takes place, principally of coregonids, to redress the balance. As a result, the white fish now dominate. Over the same period the catches of smelt have dropped from 50% to 1% of the total catch. Present management is to increase the population of predatory fish and reduce the number of cyprinids.

The chief threat to the lake is from eutrophication brought about by domestic sewage from the town of Suwalki, located in the catchment of the River Czarna Hancza, and the many small farms scattered within the park. The installation of a modern sewage plant with precipitation of phosphorus, at Suwalki, has improved the situation considerably but continued inputs of nutrients from the catchment and the farms still present threats to the lake.

A Hydrobiological Research Station was set up on the shore of Lake Wigry in 1920 by Dr. Alfred Litynski. The first research work on the lake was carried out from here and Thienemann and Naumann were among many guest workers. The station is considered as the cradle of Polish Limnology and provided limnological courses for students. Unfortunately, the station was closed in 1939 by the outbreak of the second world war and has not functioned since. However, a small laboratory has been constructed in the National Park complex from which basic limnological monitoring is carried out. It is hoped to revitalise the research work with the aid of the SIL “Adopt a Lake” project (see related story). The building of the former research station still exists and will be converted into a museum presenting the Park’s aquatic systems.