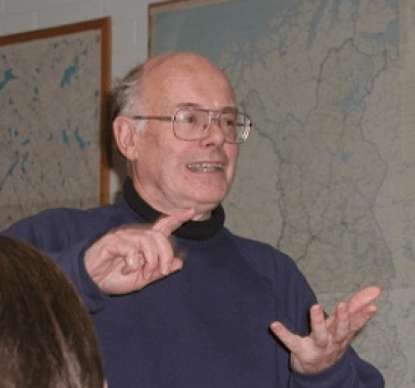 The key expertise of Colin S. Reynolds was exploring phytoplankton patterns in different types of aquatic ecosystems in relation to a broad array of habitat characteristics, including characteristics that were often overlooked like light, turbulence and stratification patterns. His holistic approach not only allowed for a better understanding of ecosystem functioning but also for extending his knowledge to other disciplines and to applied aspects of environmental science and education. He was a dedicated SIL member since 1966 and a Naumann-Thienemann Laureate in 2001.

Born in London and raised in Shropshire (England) he completed his formal education at the University of London (B.Sc. in 1965; Ph.D, in 1971, D.Sc. in 1981). Colin Reynolds started research at the Windermere Laboratory of the Freshwater Biological Association (seconded to Institute of Freshwater Ecology, 1989-2000 and to Centre of Ecology and Hydrology, 2000), where he was employed until his retirement in 2002.

Colin Reynolds gained his early experiences on naturally enriched meres of the English North-West Midland. This included experiments in large plastic enclosures (Lund Tubes) and studies of buoyancy regulation of cyanobacteria. He soon broadened his approach to many aspects of physiology, life history, indicator communities and process-based ecological models and to different kinds of aquatic ecosystems including high altitude lakes and even oceans. Generations of phytoplankton ecologists gained their basic knowledge from his more than 200 papers and three influential textbooks: “The ecology of freshwater phytoplankton” (1984), “Vegetation Processes in the Pelagic: A Model for Ecosystem Theory” (1997; as winner of the 1994 Excellence in Ecology Prize by the International Limnological Institute, Germany), and  “The ecology of phytoplankton” (2006); edited or co-edited books, among them “The Lakes Handbook” (2003, 2006) as well as thematic journal issues (Developments in Hydrobiology/Hydrobiologia 1993, 1994, 1998, 2000).

Colin Reynolds was a lifelong researcher. Though he acted as Elected Honorary Visiting Professor at the Universidad de Buenos Aires (1994) and as Invited Visiting Professor at the University of Reading (1995), his teaching activity extended far beyond these positions. He supervised six Ph.D. students and enthusiastically lectured at different conferences, symposia, workshops and wherever he was invited. He was a thoughtful world leader in phytoplankton ecology and willingly gave time to encourage young researchers. As part of this activity, he was deeply involved in the foundation of the European Federation for Freshwater Sciences and was its convener during 1999–2011. Inspired probably by his schoolteacher wife, Jane, his dedication to science and education led him to write on how to use Lego bricks for teaching ecology (1994)

Apart of his immense contribution to aquatic ecology, Colin Reynolds was an active and dedicated member of his local community in many different ways including his enjoyment of being mayor of his town Kendall in 1992-93.

Much about the person can be learnt from comments of colleagues to the notice of his death in November 2018:

“Colin has been one of the outstanding phytoplankton ecologists of the world, author of great publications including books, which guided the and inspired the research of many of us. On top of that, he has been a wonderful person, a great colleague and friend. What a sad day!” – Ulrich  Sommer (Germany)

…” his 2 books were “the bible” for me! I remember puzzling over my phytoplankton data in the early 1980’s, wondering what messages they contain, when his texts provided the eye-opener. He was a wonderful teacher! … He will remain in that role in phytoplankton ecology, and ever so often I respond to submissions for Limnologia with: “please read Colin Reynolds and try to give some explanation of WHY your CCA data indicate what you propose they prove!”  – Ingrid Chorus (Germany)

“ Colin Reynolds has been a great person, an inspiration for our generation around the world… I feel very sad.” Maria Moustaka (Greece)

…”I remember him very much as the great teacher of all of us.”  – Carmen Royo (Spain)

“What a big loss !! So, so sad! I first met Colin as a PhD student when I visited the Ferry House, then he was one of the examiners of my PhD thesis. In the 1980s and 1990s I read every single paper he published. … his textbooks on the ecology of phytoplankton are the single major source I always go to first. … May he rest in peace.” – Tamar Zohary (Israel)

“Colin meant a lot to me, since the 1980s, where I got aquatinted with his writings, and met him for the first time at the SIL Congress in Copenhagen. … He was a unique and most helpful person, who managed to combine his understanding of phytoplankton traits with limnological knowledge, and with his political work as a Mayor in Kendal in order to save lakes from human impact. I am so sad he is no longer with us. Blessed be his memory.” – Kirsten Olrik (Denmark)

“I’m very sad … Colin was a fantastic person, he left us a lot, not only for his great scientific legacy, but also in all the human aspects.”  – Irina Izaguirre (Argentina)

“How sad… sad for the enthusiastic and wonderful person that Colin was, and sad for the scientific community. His work is eternalized and we are very grateful for everything he has taught us. God bless you dear Colin.”  – Vanessa Becker (Brazil)

“I have so much to thank Colin for and I have used much of his ideas in interpretations of phytoplankton occurrences in Swedish lakes.”  – Eva Willén (Sweden)

“I think that all those who had chance to benefit from Colin’s friendship are finding themselves deprived from this sad event. It will take time to grieve.” – Luigi Naselli-Flores (Italy)

“…young ‘phytoplankton scientists’, who … never met him, have also and always been motivated and inspired by his work. This inspiration will last for very long time. “ – András Abonyi (Hungary)

“Colin was an inspiration for more than one generation around the world…. I have no more words at this moment.” – Vera Huszar (Brazil)

“Colin Reynolds was an invited speaker at the 8th International meeting on Phytoplankton Taxonomy and Ecology (IAP) in Baja, Hungary in 1991 (see Appendix in Sommer et al., 1993). An afternoon discussion on the central topic of the workshop, the application of the intermediate disturbance hypothesis to phytoplankton – proved unforgettable. Colin and my late professor Pál Juhász-Nagy, a theoretical ecologist, spent hours in front of a double blackboard (which was cleaned several times) and discussed, discussed and discussed the relationships between habitat properties, disturbances and community behavior.  This event influenced Colin as he described in a short essay (2001).  From that time on he never missed participating at the IAP Workshops sharing his knowledge with us.” Judit Padisak (Hungary).