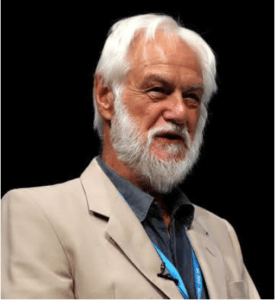 Prof. Brian Moss, a pioneer in the ecological restoration of lakes worldwide, sadly died on the 27th May 2016. Examining the scientific contributions of Brian Moss reveals a long, fruitful and distinguished career. Initially focusing on detailed algal studies and the functioning of shallow lakes, he later generalized and explored the relationships between aquatic systems and society. This later work did not just consider ecosystem functioning as the sum of bottom-up or top-down processes, but taught us to consider broad lessons from cultural studies, especially the arts. His view of freshwaters was certainly more than the sum of the parts.

Brian’s first paper written during his PhD at The University of Bristol, studying the algae of a small pond, described an innovative method for quantifying the abundance and pigment content of algae on submerged sediments. Following his PhD, he developed his career on tropical limnology, holding a research post at Lake Chilwa in Malawi for a year. Due to an exceptional drought in 1968, however, the lake dried up and his work there ended after only 1 year. Nevertheless, this was the start of Brian’s long-lasting passion for African limnology with hippos and floodplains featuring strongly. He followed his time in Africa with post-doctoral work at Michigan State University, USA, where he worked on a large-scale experimental lake system, investigating the impacts of nutrients on algae.

This work delivered a seminal series of papers on the influence of environmental factors on the distribution of algae (Moss, 1972;1973a;1973b,1973c). Importantly, it was here that he was first stimulated by colleagues at Michigan to think more broadly about the functioning of lake ecosystems. He moved to The University of East Anglia to a department where this broader environmental science vision was encouraged. Brian and the many students and post-docs in his lab, alongside long-term collaborators in the Netherlands & Denmark, began to analyse key aspects of the structure and functioning of shallow lakes, highlighting the crucial role of submerged vegetation as a refuge for zooplankton against fish predation (Timms & Moss 1984); the direct and indirect trophic interactions in the classical food web and the consequences on phytoplankton consumption (Moss, 1990); the existence of alternative ecosystem configurations or regimes in a wide range of nutrient concentrations (Scheffer et al. 1993); the multiple feedback mechanisms associated with eutrophication and oligotrophication processes (Moss, 1990) and the role of salinity in shallow brackish lakes(Moss,1994). Brian was instrumental in many of these new frontiers in shallow lake ecology and continued this work following his move in 1989 to become Professor at the University of Liverpool. At Liverpool, he demonstrated the importance of nitrogen limitation in shallow lakes (Moss et al., 1994) and the role of nitrogen in the loss of submerged plants (James et al., 2005), and established a large lake mesocosm facility to examine the effects of climate on the ecology of shallow lakes (Moss et al. 2003). More recently, Brian wrote about the interactions between science and politics (Moss 2008) and profound reflections on the links between man and nature, and the main current challenges of human societies (Moss 2010).

The scientific contributions of Brian promoted a systemic holistic approach in Limnology (dominated sometimes by fragmented and reductionist perspectives) and an interdisciplinary exchange with other disciplinary domains. The challenges of the restoration of eutrophic ecosystems decisively defined the main features of his scientific career. However, his education, political and ethical opinions, are also key factors for understanding the main interests of Brian and his legacy.

The study of shallow lakes required collaborations with experts from other disciplines. As a part of such collaborations, Brian conducted multiple consultations, delivered postgraduate courses, supervised many overseas postgraduate students, and conducted joint research projects with scientists from all over the world. An interesting example was a series of interactions he had with scientists in Uruguay, initiated by a postgraduate course he gave there in 1998. The course “Ecology and restoration of shallow lakes” was given only once, but it attracted a large number of advanced students and senior researchers from many South American countries. Interestingly, Southern hemisphere scientific cooperation was rare in those days, but many strong scientific and personal ties among the course participants were initiated then. These contacts continue today and have actually strengthened with time. Brian ́s contribution was not only to encourage cooperation but also to change the philosophy and approach of limnological research. The scientific exchange between Uruguayan, Argentinean and Brazilian researchers promoted a systemic change such misconceptions, Brian delivered three elegantly laid out, influential talks together with his dearest and long lasting colleague and friend Erik Jeppesen. These talks convinced the 200 or so people in the audience attending the symposium and later became part of a symposium book that was translated into Turkish which truly established the scientific understanding of shallow lakes in Turkey.

Brian was a gifted speaker, a unique story teller who knew how to mix art, poetry and science in a splendid cocktail. One of his last conference talks was the Shallow Lakes Conference held in Turkey in 2014. Here he delivered the last plenary of the conference, elegantly reviewing the state of the science and encouraging the audience to be more holistic in their approach. He returned to the example of an un-engineered African floodplain ecosystem in Tanzania, where he had recently spent 2 months studying the shallow lake ecosystems and the fauna that depended on them. It highlights his interest in international limnology that he started and finished his scientific carrier thinking about African freshwaters and using them to show that European waters lack the important large herbivores and predators in the catchment to really be considered undisturbed. Long after being retired he was still able to shake the audience with his novel ideas and because of high demand, the talk is available to view on YouTube (https://www.youtube.com/ watch?v=MM7l8uH9PzI).

Brian had a long research connection with the Netherlands ; he was a member of the scientific committee at the Limnological Institute, Nieuwersluis, since the mid-1990s, now called the Netherlands Institute of Ecology (NIOO) and located at Wageningen. He started visiting the Netherlands in the late 1980s and early 1990s in connection with the initiation of studies on lake biomanipulation at RIZA (Institute for Inland Water Management and Waste Water Treatment at Lelystad). His lecture at the First Biomanipulation Conference, held in Amsterdam in 1989, on engineering approaches to lake restoration from eutrophication has now become a well cited paper (Moss 1990). Later, such studies facilitated, under Brian’s supervision, the start of European Union Studies on comparing the effects of climate change in lakes of varying latitude. These included lakes in Scandinavia in the North to Dutch and Belgian lakes in Central Europe and lakes in Spain in the South. At one of Brian’s last visits to the Netherlands; he was invited as an honorary guest to attend the retirement and farewell Symposium in December 2011 of the famous Dutch limnologist, Dr. Harry Hosper. Harry had worked for many years at RIZA on biomanipulation of dozens of Dutch shallow lakes (see SILnews letter 59 ). Brian was a member of the editorial board of Aquatic Ecology from 1996-2011 and continued this honorary work until his passing away last year. He hardly declined reviewing a MS sent to him for review and he often helped young student authors with their scientific writing, in addition to the scientific content.

The personal characteristics of Brian Moss and his interest in learning about different cultures and regions of the world, were promoted through his prominent role in the SIL. Brian first joined SIL in 1969
and was a member continuously for 47 years. He received the prestigious Naumann-Thienemann Medal Award in 2007 in Montreal, Canada, “for creating, through his research and scientific leadership, a fundamentally new understanding of shallow-lake ecosystems”. In 2007 he was also elected President of SIL, and served two terms of 3 years each, up until the 2013 SIL Congress in Budapest, Hungary. For much of these two terms he also acted as General Secretary-Treasurer for the society. His presidency was during a period of major change in the Society. At many previous Congresses the national representatives had discussed how SIL’s publications, the former Proceedings, could be transformed to be more “citable” publications with a rigorous review system. Brian became the leading force in the transformation of the Proceedings to SIL’s current peer-reviewed journal Inland Waters. Although others participated with energy in the process, Brian made it happen, with the first issue of Inland Waters appearing in January 2011. Thus, he made SIL take an important step into the 21st century. Choosing a name for the new journal was an issue that couldn’t be resolved within the SIL executive committee due to differences of opinion, so Brian involved the entire SIL membership to vote for a suitable name, and Inland Waters was eventually chosen.

In addition to being an outstanding scientist, Brian was always a supportive person and inspiring leader. He was always helpful, generous, willing and wise about dealing with people. All his years of joint work and scientific interactions, allowed many of us to get to know a person deeply committed to his work, with a spartan austerity, generosity in sharing knowledge and experience, and a great promoter and coordinator of research networks and collaborative research.

In the last few months of his life he was simply remarkable. He faced the prospect of his nearing death with no fear, and shared his experiences with those close to him. He was remarkable in the way he was open, direct and courageous about his liver cancer, saying that as an ecologist he knows that he should die and leave room for the younger generation. A few weeks before his death he wrote a personal letter to SIL members that opened the June 2016 issue of SILNews. This letter reflected his courageous personality. Unexpectedly his death on the 27th May 2016 preceded the circulation of this Newsletter, so that his letter could be read only in retrospect.

He deserved every bit of the incredible respect that he received from the the limnological community. Undoubtedly, he represented one of the founders of the community of scientists associated with the study of shallow lakes. Through his public lectures, widely read textbook (Moss, 2010), and wide travels he became more than that, he was an ambassador for freshwater science and ecology at large and its importance to society across the globe.

Moss B. 1972. The Influence of Environmental Factors on the Distribution of Freshwater Algae: An Experimental Study: I. Introduction and the Influence of Calcium Concentration. Journal of Ecology 60: 917-932

Moss B. 1973. The Influence of Environmental Factors on the Distribution of Freshwater Algae: An Experimental Study: II. The Role of pH and the Carbon Dioxide-Bicarbonate System. Journal of Ecology 61: 157-177

Moss B. 1973. The Influence of Environmental Factors on the Distribution of Freshwater Algae: An Experimental Study: III. Effects of Temperature, Vitamin Requirements and Inorganic Nitrogen Compounds on Growth. Journal of Ecology 61: 179-192

Moss B. 1973. The Influence of Environmental Factors on the Distribution of Freshwater Algae: An Experimental Study: IV. Growth of Test Species in Natural Lake Waters, and Conclusion. Journal of Ecology 61: 193-211

Moss B. 1990. Engineering and biological approaches to the restoration from eutrophication of shallow lakes in which aquatic plant communities are important components. Hydrobiologia 200/201: 367-377

Moss, B., S. McGowan, and L. Carvalho 1994. Determination of phytoplankton crops by top-down and bottom-up mechanisms in a group of English lakes, the West Midland Meres. Limnology and Oceanography 39: 1020–1029

Timms RM & Moss B. 1984. Prevention of growth of potentially dense phytoplankton populations by zooplankton grazing, in the presence of zooplanktivorous fish, in a shallow wetland ecosystem. Limnology and Oceanography 29(3): 472-486