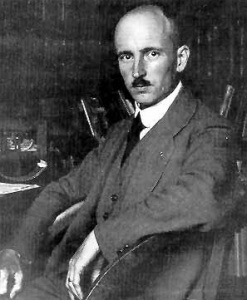 The Internationale Vereinigung für Limnologie (IVL), now commonly known as Societas Internationalis Limnologiae (SIL) was founded on Thursday, August 3, 1922 in the auditorium of the Zoological Institute of Kiel University, Germany. At 9:15 a.m. Professor Thienemann opened the first formal sesssion with the address “Zwecke und Ziele der Internationalen Vereinigung für theoretische und angewandte Limnologie (Begrüßungsansprache)”, published as the first paper in the first volume of the Verhandlungen (Proceedings) (Thienemann 1923). In his address Thienemann briefly reviewed the initiating actions of Naumann and himself (Naumann put forward the idea of founding an international society for limnologists at a meeting with Thienemann at Lund, Sweden, in April 1921), and summed up the positive reactions to a leaflet in three languages which they had distributed to over 1000 colleagues in January, 1922. The title of the paper was “Vorschlag zur Gründung einer internationalen Vereinigung für theoretische und angewandte Limnologie” (Naumann & Thienemann 1922). The general response was most encouraging and Thienemann could tell the 187 participants of the First General Assembly that the support already given was adequate for the foundation of the Association. Nobody objected, and Thienemann declared the Internationale Vereinigung für theoretische und angewandte Limnologie formally to be founded.

We want to embrace the limnologists of all countries, that means to be truly international, or to say it perhaps better, to be supernational.
We want to combine theoretical and applied aspects of freshwater research in our Association.
We want to bring limnologists working in hydrographical and biological fields close together in our Association.
The first goal is still to be found in the official letterhead of SIL: “Wir wollen die Limnologen aller Länder zusammenfassen, also wahrhaft international, oder vielleicht besser gesagt, übernational sein.”

The two founders were AUGUST THIENEMANN (born 7. 9. 1882), then associate Professor of Hydrobiology at the University of Kiel, and EINAR NAUMANN (born 13. 8. 1891), assistant professor of botany and limnology at the University of Lund. Thienemann was the director of the former Hydrobiologische Anstalt der Kaiser-Wilhelm-Gesellschaft (now Max-Planck-Institut für Limnologie) at Plön. Naumann worked during the summers at the Fishery Station in Aneboda (Småland, Southern Sweden), where he established a field laboratory of the Limnological Intitute in Lund (now Einar Naumann Field Station). These previously unpublished photographs of Thienemann and Naumann, kindly provided by Thienemann’s family and Prof. Sven Björk, Lund, date from the time of the foundation of our Association. 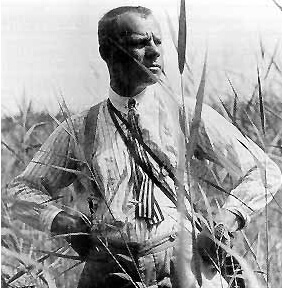 The characters of Thienemann and Naumann were very different. Prof. Rodhe, who was a friend of both, gave in his President’s Lecture at the 19th International SIL Congress in Canada an engaged homage of both men (Rodhe 1975): “THIENEMANN was a man of outstanding culture, deeply rooted in the intellectual heritage of Western humanity. He was particulary familiar with Goethe’s sphere of ideas, and the influence from the classics is a hallmark in many of his own writings. His temper was excellently balanced, with a positive and helpful attitude towards men and matters, tolerant to people of different opinion and seeking the best in everything. He had a great gift to create a friendly atmosphere around himself which saved our Association from critical situations, particularly in the first, post-war period. He always had time for togetherness, but also to solve troubles for others. With all this he combined an extraordinary working capacity, seemingly without any signs of exhaustion.

NAUMANN, on the other hand, was like an unbridled force of nature: sparkling with energy, full of ideas and initiatives, impulsive and free from the bonds of etiquette, always categorically positive or negative but rarely between. His temper could oscillate from blue-eyed optimism to darkest pessimism; when down-hearted he used to withdraw into his study. In high spirits, he was a charming and burlesque fellow, a hearty and joyful friend, a wonderful and most exciting teacher. In such a mood, he enjoyed and animated jovial parties. In his last years, however, the exhilaration was quenched by abstinence and non-smoking. He never abstained from his dominant passion: to work for limnology, at a fabulous rate. Suddenly, at the age of 43, he could not do any more.”

Their topics of research were also almost opposite (See also SILNEWS 21 Ed.). THIENEMANN started from studies of the bottom-fauna and its relation to the oxygen content of the deep water zones, NAUMANN focused on phytoplankton and its relation to nutrient conditions of various lakes. From these different starting points they came to similar conclusions on how to classify lakes. This was really the beginning of the “Seetypenlehre”, which became so important for the development of contemporary limnology. Since the 13th Congress in Helsinki (1956) the quantification of the various lake types by means of the Steemann-Nielsen 14C-method (Elster 1958) became possible. This congress was also a milestone from another point of view. The presentations of Russian limnologists, especially Prof. Kusnezow, demonstrated the immense importance of microorganisms for the dynamics of water bodies. The lake as a heterotrophic system became apparent. The history of limnology has been comprehensively reviewed by Elster (1974).

SIL celebrated its 50th anniversary with a Jubilee Symposium in October 1972 at Kiel, the birthplace of the IVL, published in Mitteilungen No. 20. At the meeting of the German limnologists at Frankfurt am Main in October 1997 we celebrated the 75th anniversary of the founding of SIL. The breathtaking development in all fields of limnology including biochemical, molecular and genetic methods and the strong international interactions by means of modern electronic networks promise that also in future limnology will be a pioneering ecological science combining theoretical and applied aspects for the welfare of the environment.

It is the intention of this piece to mark the milestone – 75 years of SIL -, but let me conclude by citing the last paragraph of the Presidential address by Prof. Rodhe at the Jubilee Symposium “50 Years of Limnological Research” (Rodhe 1974): “I hope therefore, that the International Association of Theoretical and Applied Limnology will find new resources and ways to activate its national sections, possibly in cooperation with national societies that have limnological objectives. Several sections already have spontaneous activities in line with the Association´s goals, but all of them need more support”.

There are now more than 15 national limnological societies with about 10,000 members. The oldest, the Netherlands Society of Aquatic Ecology, was founded in 1921 and is thus even older than SIL. Cooperation is urgently needed to make the Association’s activities more effective at the national level, especially for applying limnological science to practice and to increase our influence on legislation. I think that this is quite in accordance with the first goal of the Association: “We want to embrace the limnologists of all countries…”